Korean food has become popular world wide. Galbi, bibimbap, and kimchi jjigae have become terms known by Korean food connoisseurs as well as casual fans alike. One of the reasons for the success of Korean food is that it is generally well suited for taste buds all across the globe. There’s a wide variety that most anyone will enjoy.

But Korean food is more than just bibimbap and kimchi. There’s a whole range of food that most non-Korean’s have never even heard about. And there’s good reason.

Here’s a list of 5 Korean foods for the brave. Whether it be because of taste, smell, texture, or spiciness, these bizarre Korean foods are on the extreme end of the spectrum, so much that even some Koreans won’t eat these! Read on to see if you’re game! 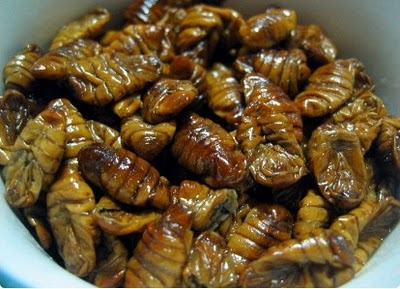 This is by far one of the most visually weirdest foods Korea has to offer. Mostly found in markets or vendors at parks, the culture around eating this odd Korean food can be likened to eating hot dogs in a park. You grab a cup of steamed silkworm larvae (complete with the juices that come out during the steaming process) and walk around the park enjoying the view, eating your silk worms with a toothpick! The taste is nothing special, nor is it particularly revolting. But the actual feel of a silkworm larvae in your mouth, complete with the explosion that comes with the first bite, is what makes this Korean food so hard to swallow!

Tip 1: Find these in markets and large parks with vendors in Korea. Also can be found in Korean supermarkets around the world.
Tip 2: Korean supermarkets in America will sell these in cans, but they are labeled as fish bait. “Don’t worry FDA! It’s not food, it’s bait!”

Mmmm… Looks like another Korean Barbeque! But hold on there cowboy. Jokbal is another type of Korean meat, just not what you expect. Jokbal is quite literally pig feet. Just like the other Korean meats, jokbal is often a food that accompanies alcohol, often late at night. It’s eaten like the other Korean meat offerings, wrapped in sangchu, with a bit of ssamjang and garlic. This dish is actually quite tasty and is wildly popular with the general Korean public. But if you’ve ever walked into a restaurant and seen a pig foot lying on the chopping board, you’re going to need some grits to get you to put it in your mouth.

Tip: If you’re living in Korea, these are delivered nation-wide, usually 24 hours a day. 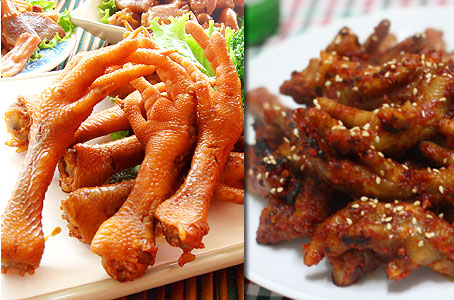 Raw octopus is a Korean delicacy that many people try. It’s when the octopus or squid is alive that the real adventure seekers come out. One variation is to get a live octopus or squid and slice it up. Although it’s technically dead, try telling that to the detached, yet still squirming, tentacles attempting to escape your plate. Once you put it in your mouth, feel the suction cups grasping onto your teeth and tongue. It’s almost like eating a real live octopus! Think that’s crazy? Try eating an actual live octopus. The other variation is to get a baby octopus, no slicing, no killing, alive in all its squirmy ways, and just shove it in your mouth. It’s that simple. Eating a live octopus in Korea is probably the pinnacle of Korean food for the brave.

Fermented Stingray – Hongeo (홍어)
Another seafood extreme that challenges eaters to go over the edge. Even if you consider yourself a sushi veteran, able to take mouthfuls of raw fish with no hesitation, this is no ordinary sushi dish. If you ever come across this, you would know instantly. The extremely pungent odor, which many liken to the stink of ammonia, makes this one of Korea’s true delicacies. Even coming across this dish at restaurants can be difficult; it’s probably not high on too many favorite foods lists. In actuality, for the Koreans that have had the courage to try this dish, many vow never to eat it again. The smell is that strong! Hold your nose, shove it in mouth, and pray that you don’t have a gag reflex…. if you’re brave enough to try this Korean delicacy that is!

Know any other Korean foods that require a bit of courage? Share with us in the comment section!