Take out from Cafe Mamas 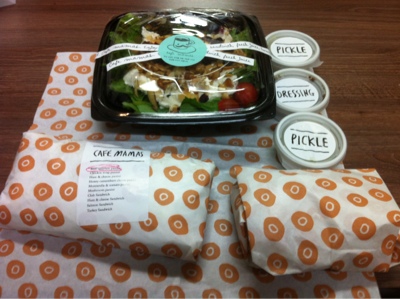 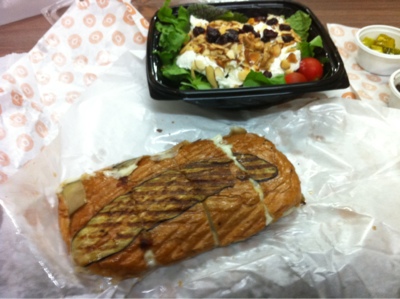 The love of my life brought me dinner from cafe mamas. It was ok. I mean I wouldn't eat there regularly not did I think it fit my palate, but it was interesting. The first thoughts that came to mind were soft and cheesy. This was followed by the thought of my arteries clogging up with grease.
The balsamic salad was topped with delicious but too much homemade ricotta (which seemed more like a drained cottage cheese), dried cranberries and nuts. This was served with a very soft white bread which seemed too plush to have been baked in an oven (this is not a complement).
The sandwich was a grease bomb. It was oozing with cheese and grease from the beef. It was artfully decorated with a slice of eggplant before being pressed in the panini press. Like I said too much mozzarella  cheese that was more stiff than oozie (my fiancé did takeout, so this might have had something to do with it). Anyway, it was a bit too much it made it dense and impossible to eat. Well, it could definitely be shared though ( and that is how most Koreans would eat it).
I just thought it needed a sauce of some kind because it just had thinly sliced beef with lots of cheese.
I did like the pickles they offered. They definitely looked and tasted homemade.
Overall, I can't say I loved the meal but if you just need some cheese, get on over there.
Dan
cheese Sandwich