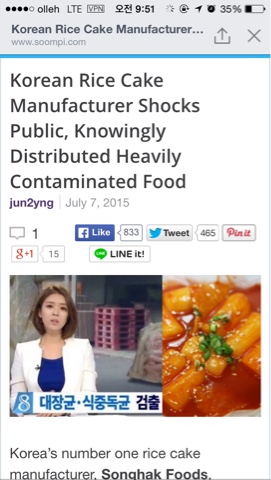 It's scary to think this but many of the rice cakes sold at stores and restaurants may have been contaminated with e-coli. This is just irresponsible for it puts a blight on the entire food industry. On top of that rice cakes that were returned for failing sanitation tests were given to charity groups. Shame on you Songhak foods. Readers, I suggest you stop eating rice cakes until they get this all sorted out.

"Korea’s number one rice cake manufacturer, Songhak Foods, brought shock to the Korean public when it was revealed on July 6 that the company had been distributing rice cakes containing E.coli and harmful pesticides to large marts and franchises from last June to January of this year. The amount of food distributed amounts to 18 billion won (approx. 16 million USD). Some sources state the contaminated food was distributed for a period of two years."
Foodscare news rice cake