Seoul Playdate: Sledding at Baedalgol and Cooking for Baby 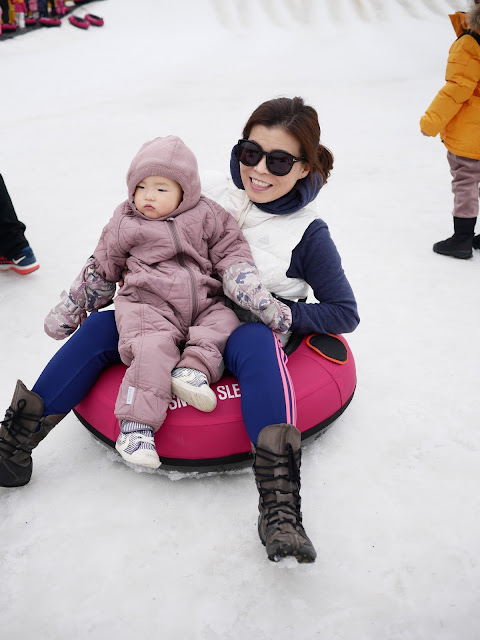 We wanted to spend a fun day wit our baby so we went to baedagol Taema Park for sledding. Good times and #hazellbaby loves it ! #seoulkiddate #sledding #korea
A video posted by Seoul Eats By Yoonie and Danny (@seouleats) on Jan 7, 2017 at 7:57pm PST

Ok, so this whole baby thing is fun. There is just a ton of stuff that we need to do to keep the baby happy. She is the boss after all. Over the weekend, which was unusually warm, we took Hazellbaby to Baedagol Taema Park over by Ilsan.

The park is great. They have a huge coy pond attraction, animals such as pigs, bunnies and donkeys; and a mini sledding part. We spent a few hours there playing and eating. The eats were pretty good for typical Korean park fare such as sweet potatoes, tteokbokki, ramen etc. They did have handmade sausages which were pretty good and pizza there. The pizza was pretty generic but they did cook it in a stone oven.

The next day it was all about staying home and cooking for the baby. I made some zucchini with beef for Hazell, but she didn't really like it much. This was somewhat upsetting since the beef was very expensive. My wife said it is because the meat smelled too much like beef so next time she recommended that I cook it with some garlic to get rid of the meat smell. This makes sense since my baby prefers food that is quite plain such as tofu and noodles. I know, not fun or exciting but she loves the texture of them.

Hazell loves to mix rice with soup and eat it. I think it makes it easier for her to eat. Her favorite dish is egg and tomato soup. I take the skin off the tomato and cook it with some basil and garlic. After it cooks down, I add water and then drop an egg in. Once I drop the egg, I mix it up so it becomes like an egg drop soup.