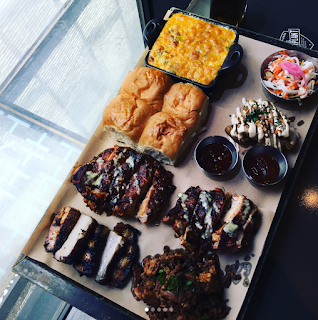 Eating at Upscale Korean Hawker Center: D-Tower in Seoul, Korea D-Tower is an impressive food complex with 5 floors of all restaurants. It's like a very upscale hawker experience that is focused on food, beer and coffee. We went to the Powerplant which is like a cafeteria but with beer. Very open atmosphere with a large beer selection. We got the Manimal Platter which was good (55,000 won) but I found quite a few chunks in the pulled pork. The chicken and the pork belly were luscious. I also liked their chili mac n cheese. We also got the lobster roll (19,000) which was alright, but meh for the price. The place is great to hang out with some friends for a few hours or so but I find that I prefer smaller hole-in-the-walls. The only problem I had is that after so much eating and drinking at D-Tower, there isn't much else to do such as shopping or anything else. Let's see if this concept will work in Korea. I hope it does, but I find that most Koreans want it all: shopping, good food, entertainment. #koreafood #seouleats #foodcourt @manimalsmokehouse
Eating at Upscale Korean Hawker Center: D-Tower in Seoul korea YouTube