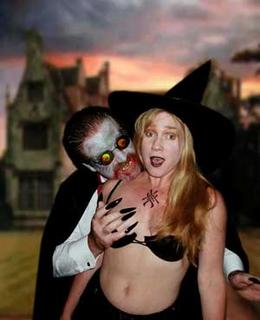 This whole week I'm going to do a Halloween lesson. I'm going to pit the students against each other for the love of candy. I know it's a bit devious, but in this society it's an effective teaching method and dolefully encouraged.

I am going to read the students a dialogue about Halloween and ask them questions. If they get it right then I'll give them candy. For the 3/4 it'll be easy, but for the 5/6 a little more difficult. I have two dialogues. One about the Day of the Dead and Halloween. This is one possible Halloween dialogue.

Halloween is celebrated on October 31st. It takes place the day before All Saints' Day. In the 700's, the Roman Catholic Church named November 1 as All Saints' Day. The old pagan customs and the Christian feast day were combined into the Halloween celebration.

Many superstitions and symbols are associated with Halloween. Some of these symbols are jack-o'-lanterns, black cats, witches, ghosts, spirits, goblins, fairies and elves. The custom of decorating with leaves, pumpkins, and cornstalks comes from the Druids - an order of priests in ancient and .

Halloween is usually celebrated by both adults and kids. Some families celebrate by having costume parties and playing special games like bobbing for apples and telling ghost stories. Sometimes children go "trick or treating" - knocking on doors in their trusted neighborhoods collecting candy. Other times they may attend a community party instead. Parents should use common sense when supervising their child's Halloween activities.

In earlier years, Halloween was a time for playing harmless pranks. However, in more recent times, Halloween pranks have sometimes gotten out of hand - causing damage and injury to others.

Schools usually prefer to celebrate Halloween by having children dress as storybook characters. In this way, children are still allowed to "dress up, " and the holiday becomes both fun and educational.

Day of the Dead (from wikipedia)

The souls of children are believed to return first on November 1, with adult spirits following on November 2.

Plans for the festival are made throughout the year, including gathering the items that will be offered to the dead. During the period of October 31 and November 2 families clean and decorate the graves. Families build ofrendas altars in their homes, and also attend mass held on the evening of November 2 in the cemeteries where their loved ones are buried. Families have decorated the gravesites with offerings to please the dead and to entice their spirit to remain in the cemetary when the festivities have ended.

Items that can be found on ofrendas include wreaths of marigolds, called cempasúchil by the Aztec, The Flower of the Dead and is thought to attract the souls of the dead with is pungent scent. Toys are placed on the ofrendas for the spirits of the dead children (los angelitos, or little angels) and items such as liquor, tequila, mezcal, pulque, atole or even soda are left for adults. Ofrendas in homes are littered with the favorite foods, beverages and even favorite cigarettes that the deceased enjoyed in life. Some people believe the spirits of the deceased eat the spirit of the food, so after the festivity, they eat the food from the ofrendas, but think it lacks nutritional value. Most offendas will have incese, food, water, salt, candles, flowers, sugar calaveras, paper, and a straw mat, which honor the deceased. In some parts of Mexico, like Mixquic, people spend all night beside the graves of their relatives.

Those gifted, like to write literary "calaveras" -- short poems mocking [[epitaphs or obituaries] of friends. Newspapers dedicate calaveras to public figures, with cartoons of skeletons. One of the most famous cartoonists is Jose Posada, who lived during the 1920s to 1950s. Theatrical presentations of "Don Juan Tenorio" by José Zorrilla (1817-1893) are also traditional on this day.

A common symbol of the holiday is the skull or calavera. The celebrants are represented in masks called calacas. Sugar skulls, or calaveras, are inscribed with the names of the deceased on the forehead. They are often eaten by a relative or friend of the deceased. Other special foods for El Día de los Muertos includes Pan de Muertos (bread of the dead), a sweet egg bread made usually in a plain round shape adorned with four "bones" made of the same kind of bread. The Pan de Muertos is also made in many shapes, including skulls and rabbits.

I also have handouts I want to use.