My Name is Earl: Season 2 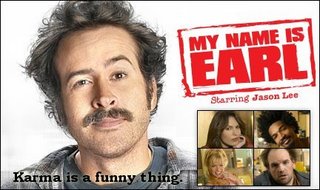 My favorite show from last year is back and expectations are high. The first season was nonstop hilarious and it's hillbilly wit tinged with progressive hippiness was simply irresistible for me. This season doesn't seem to have the charm of the first and is simply delving into toilet humor and sensationalism, but there are still moments where my kidneys feel like they're going to pop from laughter.

Episode 1:
The season starts out with Joy buying an entertainment system that is too big for her trailer. When she tries to return it the store refuses because gum has wiped off the UPC code. In retaliation she steals a supply truck and tries to hock it for the money she spent on the entertainment system only to find out that the truck she stole had a worker locked in the back. The show highlight was when Kenny tries to stop Joy from copying 100 dollar bills and screams, "I took an Oath...Copy responsibly, Copy responsibly."

Episode 2:
Since it's Joy's third strike, Joy is facing time so she has to get bail money. The bail being set at 1 million dollars is more than what Earl can afford so Earl has to procure the money from Chubby Richards (played by an anorexic Burt Reynolds) who will only agree to the offer if Earl can bring back their top stripper- Catalina.
Show highlight was when Catalina and Joy have a who's hot showdown in the prison call booth and Catalina says to Joy, "Your eyes are too big...you look like you're finding Nemo."
Catalina tries to pull off the line, "I will never jump for Joy." it garnered a slight chuckle from me initially, but the joke wore off by the end of the episode.

Episode 3:
Earl decides to tackle #91 on his list,"Made fun of Maggie Lester for having a moustache." When Earl and Randy find her, she has taken up her calling in life and is playing the bearded woman in a carnival. She lives in a small villa that includes a slew of Carnies such as the Giant, the Lobster handed boy, the World's fattest woman, the horned boy, and a midget. All of them have ostracized themselves from society and Earl makes it a mission to get them back in.
The show highlight was when the freaks that were ostracized from society decide to pursue their dreams and take up their calling. The giant becomes a stock trader, the midget a chef, the fattest woman a chiropractor, the horned boy a mechanic, the bearded woman a real estate agent, and the lobster boy a normal teenage boy. Yeah, I'm a sappy guy sometimes- whatever.

Episode 4:
Earl tries to scratch off, "Larceny of a Kitty Cat." Joy wanted win a cat show and she decided to get Earl to "Nancy Kerrigan" the competition. Earl tries to break it's legs with a crab cracker, but chickens out at the last moment. He abandons the kitty at a local cat woman's house. When he returns the cat to it's rightful owner played by Amy Sedaris, Randy falls in love with her. However, Randy is dreadfully allergic to cats.
The show highlight was when Randy has flashbacks of his failed relationships where he tried to be something he wasn't i.e. Jewish, a biker, etc. to get the girl.

Did you know that Amy Sedaris is related to David Sedaris???? The essays are true!!!!
Email Post
Labels: TV