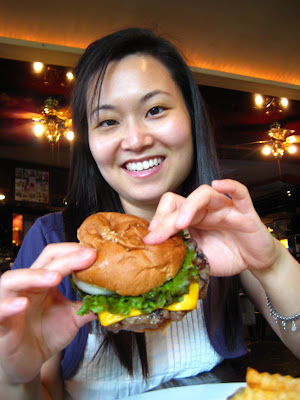 There is nothing more American than the Hamburger. Of course, the hamburger didn’t originate in the US, but that’s where it gained its fame. These days, hamburgers have become popular in Seoul and most Western style restaurants have them on the menu. Now, that doesn’t mean they all do the burger justice.

For the last couple of months, I have been scouring the city in order to find the best. My first criterion was that they had to be beef burgers. Some pork and seasonings were ok, but they had to be primarily beef. No vegetable chicken, shrimp, or pork burgers allowed. The burger had to be served on a bun- no lettuce wrappers or rice buns. I tried to stick to the standard burgers or cheeseburgers without modifications to condiments or toppings. Sides such as French fries or pickles were considered, but were not the focus of my research. Service and price were also factors in choosing the best burgers. One last thing, I like nice buns, I cannot lie. This was a deal breaker for many of the places I checked out.

#10 Tie Kraze Burger and Freshness Burger
These burgers are more attuned to the Korean sense of taste. The burgers are very soft and griddle cooked. I found them to be a bit small. They are definitely, a step up from the fast food chains and they will do in a pinch when you just need a good burger. Both have excellent atmospheres to relax in, and the prices are reasonable.
Locations throughout Seoul. Price 4,500-10,000 won. 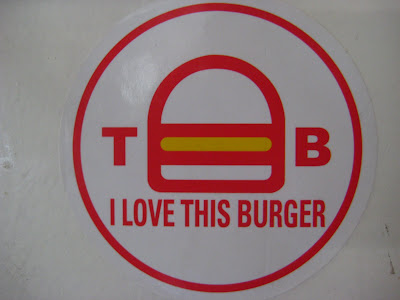 #9 Thunder Burger
Not a bad burger. It’s simple, has good meat, and are cooked fresh. I thought they were a little under seasoned, but my friend loved hers. They have freshly made fries and the price is reasonable.
Locations in Karisukgil and Itaewon. 02-796-7005. Price 5000 won.

#8 3-Alley Pub
If you want a big greasy beer sponge then I recommend 3-Alley Pub. The meat is big, juicy, and well seasoned. I think they could go with a better quality bun. The burger had a bit of a porky, mystery flavor. (I think they needed to clean the grill before they cooked my order.) Not bad, but not the best. They go down well with a beer.
3-Alley Pub, Itaewon. 02-749-3336. Cheeseburger Price 11,500 won

#7 Jacoby’s Hamburgers
They are the new kid on the block in Haebangchon and they make humongous artisan burgers. The patty has a meatloaf like texture and there are many flavor components such as onion, garlic, and rosemary. They are also creative with such choices as the “The ‘I wish I was Kosher’ Reuben Burger” and “The Brushetta Burger.” Let’s see what they come up with next. Oh, and they have awesome onion rings.
Jacoby’s Hamburgers, Haebangchon. 010-7203-0525. The Jacoby Burger costs 6,500 won. Vegetarian Burgers are available.

#6 Daily Kings
This diner has a Pulp Fiction feel to it. Its hip interior overlooks Seoul’s version of Beverly Hills: Jeongja. This diner takes American home-style cuisine and turns it into something luxurious. The burgers are picturesque; they look like they just came out of a commercial shoot. They were pretty, but lacked umph. I felt the meat lacked character and it was a tad dry compared to the others. The side of chili was a flavorful addition, but not enough to push them into the top 5.
Daily Kings Diner, Jeongja-dong, Bundang. Dinner Price 15,000 won.

Top 5
#5 Tie Richard Copycat’s All American Diner and Tony’s Bar and Bistro (Itaewon)
Service is important to the dining experience. Both of these restaurants have great burgers, but the service harms the enjoyment of the food. Richard Copycat’s All American Diner is above Starbucks on the McDonald’s end of the Itaewon. The interior has the feel of an American back porch. The burger was nicely charred and topped with real cheese- not the plasticky cheese wrapped in plastic. The bun was soft and toasted-a nice contrast to the crisp char of the outside and the soft, meaty interior. The problem is that it takes a long time to get the burger (25 minutes). The hash browns were a very nice option.
Richard Copycat’s All American Diner, Itaewon, 02-790-0411 Avg. Price W9,900 won
Just across the street and up the hill from Richard Copycat’s is Tony’s Aussie Bar and Bistro. The bistro is a bit cluttered and dark, but the exuberance of the owner/chef/drummer makes you feel right at home. Tony’s Bar and Bistro’s burgers have excellent Australian meat and toppings. All the elements are there and I’ve met people who have traveled for hours to get their Aussie fix. “The Works” burger is impressively topped with cheese, bacon, egg, beetroot, and pineapple. The only problem is that Tony is trying to do it all himself. The man cooks, he serves, he cleans, and he entertains. The food is excellent, but the service is lacking.
Tony’s Aussie Bar and Bistro, Itaewon, 02-790-0793 Burgers start at 5,000 won, The Works Burger costs 9,000 won. Vegetarian Burgers Available.

#4 Hard Rock Café
The Hard Rock Café has some identity issues at the moment. It doesn’t know if it’s a bar, a family restaurant, or a music venue. What they do know are burgers. They are huge with top quality beef. The burgers are char grilled, well seasoned, and topped with barbeque sauce, sautéed onions, bacon, and the regular fixings. My only complaint: the bun. It should have been of better quality- especially for the price (18,000 won). It was too soft and it quickly became a sponge for the juicy burger. I did appreciate the use of real cheddar cheese. Remember, you’re paying for the atmosphere (and an exorbitantly priced T-shirt.)
Hard Rock Café, Itaewon, 02-798-0067 Avg. Price W18,000 won

#3 Gecko’s Terrace
A pub during the day, wild bar at night; there are many sides to Gecko’s Terrace. I found that Gecko’s Terrace had the best rolls out of all the burger joints- it held up to the leaking juices and it has excellent texture. The meat was voluminous like a middle aged perm and lined with perfect tic tac toe grill marks. It had good beef flavored with onions. Overall, a very satisfying burger that was served with crinkly fries.
Gecko’s Terrace, Itaewon, 02-749-9425. Cost 9,500 won. 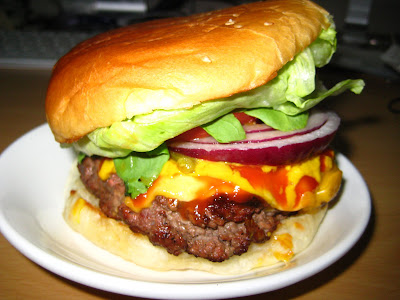 #2 The Bistro Corner
I am officially naming the hill across from Richard Copycat’s, “Hamburger Hill.” The Bistro Corner is set in an unassuming concrete corner with an industrial feel. You’ll often see chopped hickory out by the front steps, which they use to give their food a smoky richness. When I think of the Corner Bistro’s Burgers, I think fresh. The buttermilk roll has a plush texture that holds up to the voluptuous meat patty. The meat has smoky char and flavor. It’s messy, but finger licking messy. This awesome Australian patty came topped with ketchup, mustard, pickles, lettuce, tomato, onion, and arugula. I especially appreciated the arugula. It really added something to the burger and so did the side of homemade pickled vegetables. This is a well thought out burger, a burger created by a foodie.
The Bistro Corner, Itaewon, 02-792-9282. The Cheeseburger is 7,500 won.

#1 The Wolfhound
The Irish pub has the best burger of the bunch. This Itaewon mainstay has been known for its fish and chips and their burger embodies what a burger should be. It’s filling, well seasoned, the bacon is crisp, the price is reasonable, and the chips are amazing. I know, I said that the sides wouldn’t be the focus of my research, but these are just so good. Big wedges of potatoes doused in malt vinegar harkens me back to when I was an Irishman in a past life. The meat is lightly flavored with onions, garlic, basil, and salt and pepper. The top is charred and has a nice bite. I didn’t find the meat grisly or too chewy. The meat was the centerpiece of the meal. There was a thin smear of basil mayonnaise on top of the roll and vegetables. The bun works- it’s not as good as Gecko’s, but close. It’s a burger that I could see having on a regular basis. It is a comforting, simple burger that tastes good. Sometimes a burger should just be a burger.
The Wolfhound, Itaewon, 02-749-7971. Price 9,800 won. 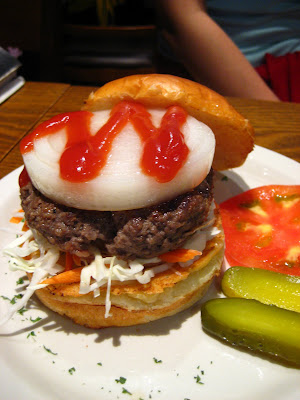 Not Recommended
Smokey’s Saloon.
Smokey’s service is awful and even though their burgers are good, I find that their pretentiousness and lack of service ruined the experience for me. And this hasn’t happened to just me, other people have mentioned how disappointed they have been. The last time I went there in order to do the story, I went there at 9:20pm (they close at 10). I even went to the Apgujeong Store, because I wanted to give them a fair write up. When I arrived, I was told that I couldn’t order. Then after convincing them to make a burger, my friend and I were told we could only do take-out. We relented and after it took them 8 minutes to make the burger, we had to sit outside at the local 7-11 to enjoy our burger. They are serving burgers for christ’s sake, not foie gras.
Smokey’s Saloon. Locations throughout Seoul. 795-9019

Hooters.
Go for the wings. Go for the Buffalo Chicken Sandwich. Go for the girls. Go for the Onion Rings. Don’t go for their burgers. Their burgers are over priced grease balls that fall apart on the bun.
Hooters. Locations in Apgujeong and Gangnam. 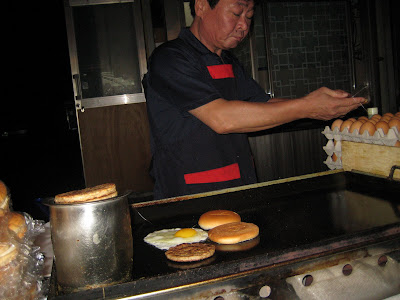 Honorable Mentions:
The Hamburger Dude Down the Street from What the Book (Itaewon)
I don’t know if the guy meets health codes and I don’t know if that’s even real beef in the burger, but I do know that he is out there almost every night making his famous egg burger. Heck, for 2000 won, what do you expect?

Orange King
Why, WHY! Did they add Russian dressing to their burger? It could have been a contender, but they had to add Russian Dressing.
Orange King. Hannam-dong. (02) 749-5515.
Email Post
Labels: american food hamburgers itaewon reviews restaurants reviews