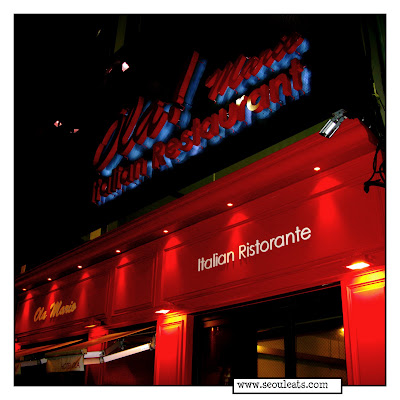 Here is an article I wrote on Ola! Mario for Arirang Magazine. Enjoy, and Happy New Year!

Ola! Mario is located between the Rocky Mountain Tavern and the Cheil Building on the developing end of Itaewon. I must admit. It’s bright red exterior and the name Ola! Mario initially made me write this off as another faux Italian Restaurant on Itaewon’s main drag. Italian cuisine in Itaewon has long been the territory of the Sortino Family. In recent years, many restaurants have tried to piggyback off of their success. Volpia and La Tavola both had respectable runs, but they went out of business and were quickly replaced by Antonio’s and Villa Sortino. So, does Itaewon need another Italian restaurant?

No, but it did need a high-end restaurant that knows how to take care of its customers and serves unique and delectable cuisine.

Walking in, you are greeted by a concierge at the door. She’ll walk you around a long bar that has a cascade-like chandelier that hangs above it. The interior of the restaurant looks like it was straight out of Soho in New York. The dark chairs and red décor give it an industrial, Victorian flair. It’s romantic. It’s elegant.

I went with my friend Kelly. We were a bit hesitant at first, because the pasta dishes were a bit expensive; they ranged from 16-24,000 excluding tax and the dishes just seemed like the standard fare. They had spaghetti with seafood and tomato sauce and they had risotto, but nothing screamed, “Eat me!” But, what caught our attention were the appetizers and the desserts. Most restaurants leave these as afterthoughts. But Ola! Mario’s menu had Foie Gras with a Marsala wine sauce (12,000) and Lobster in Sole Paupiettes with a Saffron cream sauce (14,000) and they had Ginseng Ice Cream for dessert. These sounded ambitious and exciting, so we decided to start with them.

The Foie Gras came out looking like a perfectly arranged Georgia O’Keefe painting. The goose liver, freckled with black caviar, was placed on sautéed endives, which were set in a dab of reduced balsamic. Then topping this were hand picked micro greens and champagne foam. It was self-indulgence at it’s best.

Also, the desserts did not fail to impress. The cheesecake was perfectly cut. Pythagoras himself must have cut it using a complicated algorithm. I’m a cheesecake snob and I think all cheesecakes need to have a snappy cookie crunch, which this did not. But the light cheese layer was velvety and subtly sweet, so it made up for it. I must say it ranks up there as one of the best cheesecakes I’ve had in Korea. 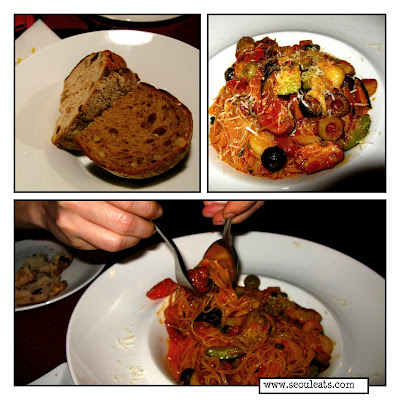 Then the ginseng ice cream glided to the table on caramel candy wings. The ice cream had an earthy, red ginseng flavor that was unexpectedly enlightening. It had a complicated, elusive zing that you would never find among Baskin Robbins’ 32 flavors.

So after dessert, we decided to tackle some pasta. We went with the capellini with artichoke, olives, and other vegetables in a tomato sauce and with a hint of truffle oil. When I think of this dish, I picture a hippie that turned yuppie. The natural flavors of the vegetables seemed to be dressed in a fine tailor made suit.

Since my first meal, I’ve gone back and each time there is a new surprise in store. The gnocchi with basil cream sauce was pillowy: each piece of pasta hand made. The pumpkin soup was like cashmere and it came served in a whole pumpkin. The salmon dish had pink peppercorns for a piccolo accent. Even the customary pickles in Ola! Mario are done with flair. You might find a pickled persimmon one day and a yellow tomato the next. The bread is always crusty and the servings of garlic bread are generous.

Ola! Mario is a gem in Itaewon. The service is top notch and the food is full of mirth and skill. I think the other establishments in the area should pay heed to its virtues. It is a classy place that is perfect for any special occasion.