GAS.GAS: The campaign to Give a Skinny Girl a Sandwich 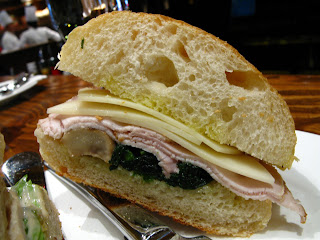 As I was headed to the subway today with a thick sandwich packed with
roasted pork, pepper soybean sauce and crisp white cabbage I passed
many rail thin, sickly looking Korean girls and it just made me want
to cry out, "Eat a sandwich."

There was one particularly skinny girl with sunken eyes that was
smoking a cigarette outside the subway entrance. She wasn't toothpick
skinny because she was poor- she had on designer pumps, a prada bag,
and a teeny skirt that flaired out from her bone jutting hips.
I approached her with my luscious sandwich.

She didn't flinch. I got closer and held up the sandwich and gave a
small smile.

She looked longingly for a second at the sandwich- then fumbled to get
another cigarette from her pack.

As I was about smelling distance from the sandwich, she looked my way
and said, "What."

"It's homemade. It's well-being. I just think you need a good meal." I
said.

"Are you crazy? It's probably poisoned," she sneered-but she continued
to look the luscious pork with tasty sauce between two slices of whole
wheat bread.

"It's not." I pulled off a piece and put it in my mouth- the pork,
white cabbage, spiced soybean sauce, and bread fusing into pod of
satisfaction.

I could see her mouth water.

Her cigarette burned to the nib and sent a shock of heat to her
fingertips.

"Ouch!" she said.
"Ok. It's obvious you don't want it." I motioned to a trashcan. Her
stomach growled and her eyes reached- almost out of their sockets as
the deliciousness got closer to destruction.

At the last second...
"Wait!" She grabbed the sandwich and ran down into the subway entrance.
This made me want to start a campaign to save all the skinny girls in
Korea and the world from the social pressures of being too thin.
South Korea is filled with girls that need to eat a sandwich. Social
pressures keep them from reaching their full figures and they starve
themselves and go on fad diet after fad diet to meet social
expectations.

For the cost of one sandwich, you can make a difference in a young
girl's life.

Give a sandwich, Change a life.


**paid for by The Campaign to Give a Skinny Girl a Sandwich (GAS.GAS)**

Sent from my iPod
funny gas.gas