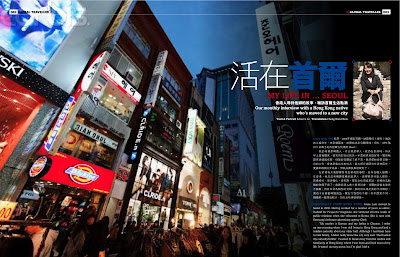 An article on Irene Lam in Global Traveler Magazine

Let me tell you a little about my friend Irene. She is originally from Hong Kong. Her mother is Korean and her father is Chinese and before she began working for Cheil- a major marketing and P.R. firm in Korea, and she was the editor-in-chief for Perspective magazine in Hong Kong.

She is accomplished and talented (she's a classically trained violinist, she can cook, and she has great tastes in restaurants.) Alright, many of the restaurants you see me check out and write about is because Irene tells me to.

But that's not what I want to talk to you about.

Irene has been an advocate for Korea for years and she has helped put Korea on the map. She was the one who brought Gourmet magazine to Korea. She is the one who has helped steer Seoul Tourism in the right direction in marketing. She is also a very strong supporter of the restaurant scene in Seoul. She should be commended for all she has done.