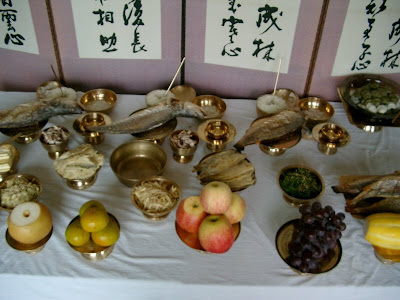 Chuseok is the Korean version of Thanksgiving. During this holiday, the family gives thanks to their ancestors by welcoming the spirits into their houses to taste the ethereal flavors of the year's harvest. This may sound superstitious, but the real intention is to commemorate the departed. Because without our ancestors, literally, we wouldn’t exist. This is a family holiday and to be invited to a family's Chuseok celebration is a very special honor. Basically, the family is accepting the guest into their family to not only meet the living relatives that attend, but also the spirits that have passed.

During my first year in Korea I was bestowed this special honor by the Kim family in Gyeong Ju. Jikyeong was a student of mine and we became fast friends and she knew that I was new to Korea and I didn't have anyone to celebrate this holiday with. I accepted her invitation, but with one request: I wanted to participate in the preparation of the various dishes. This request was met with whimsy because Chuseok is seen by many as the “wife's burden.” I didn't know this. I arrived bright and early ready to assist in the kitchen.

What I learned was that the food lacks many of the flavors that Korea is famous for. Garlic and chili peppers are purposely omitted from the Chuseok table for these strong flavors are believed to offend the ancestors. Most of the vegetable dishes such as bean sprouts, spinach, minari (mugwort), eggplant, squash, sweet potatoes and gosari (bracken) were boiled or steamed. Most were flavored with sesame oil and a little salt. I helped Jikyung's mother prepare seafood soup that was flavored lightly with soybean paste, tofu, vegetables, and squid. I then helped fry some tofu, and three whole dried fish.

After most of the food was prepared, we made “song p'yon.” Song p'yon are crescent-moon shaped rice cake that are filled with sweetened red bean or roasted sesame seed sweetened with honey. These were the most labor intensive, yet fun part of the thanksgiving feast. Mrs. Kim first took rice flour and kneaded it with a little bit of hot water to bring the dough together. The dough then had to sit for an hour or so. With half the flour she mixed it with mugwort, which turned it a dark green color. The other half stayed ghostly white. Jikyeong, Mr. Kim, and I then sat around a low table and took a little rice flour and formed a flattened disk in the palms of our hands. Then we filled with either red bean or sesame seed paste and, by closing our hands, we formed the shape of the crescent moon. It was very important to seal in the filling because they were then steamed until they were soft and pillowy.

We then set the Chuseok table. The food was arranged on two low tables upon bronze plates. The fish was laid in the center with the fish all facing east. To the northeast section we set the plate of song p'yon. Below the fish we placed seven plates of boiled vegetables: bean sprouts, eggplant, mushrooms, squash, sweet potato, gosari, and minari. Below the vegetables we put out the fresh fruit of Autumn. As high as gravity would allow we stacked plums, red grapes, apples, oranges, pears, and cham-wei: Korean melon. And then we placed three bowls of rice to the left, three bowls for soup on the right, three pairs of bronze chopsticks and three spoons, three small bronze wine cups, and one large bronze bowl which sat at the center of the table. Interestingly, the settings are the opposite of how they would normally be set, because the ancestors are in a world opposite to that of the living.

Mr. Kim and his daughter Jikyeong got dressed in their traditional garbs, hanboks, and solemnly entered the room. Mrs. Kim and I were asked to leave the room and we watched from the side. Mr. Kim and Jikyeong stood in front of the dinner table and then bowed three times, prostrating themselves all the way to the ground. Mr. Kim then poured a little rice wine from a pear shaped, long necked decanter into the large bronze bowl that sat at the center of the table, took a pair of bronze chops and tapped them three times into the bottom of the bowl.

A sonorous resonance filled the room. He then moved the three sets of chopsticks from their place setting to three different dishes. He sat one set of chopsticks on the fried fish, another on the bean sprouts, and the last set on the song p'yon. He then backed away from the table and he and Jikyeong again bowed three times. When he rose, he carefully lit incense and poured some wine into each of the small wine cups. He again tapped the bronze chopsticks three times. Then the pair reverently sat down as the scent of the incense filled the room.

When they felt it was time, they slowly rose again and bowed three times. Mr. Kim moved the metal chopsticks to three different dishes. This time he moved one set to the eggplant, another to a different fish, and the third to the minari. They bowed again and then sat before the table setting. They repeated this one last time and as the last echo of the chopsticks left the room, the ceremony was finished. 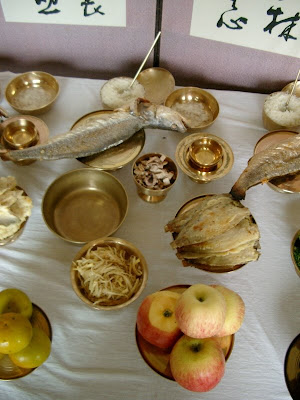 The ceremony is a beautiful progression to behold and one that has significance needs explanation to be understood. Koreans believe their ancestors live a mirrored existence, so the table settings of the rice bowl, soup, and chopsticks and spoon are the opposite from the living. The first pouring of rice wine is to welcome the ancestor into their home, the second pour is to say, "enjoy the food" and the third is to say good-bye and to go in peace. During the ceremony no living creature is allowed to be killed because- not even a fly- because it could be the spirit of the ancestor that has arrived to enjoy the meal. Koreans believe their ancestors will devour the spirit of the food but could be offended by strong flavors, so the feast is prepared as simply and naturally as possible. Everything red on the table is to the west and everything white to the east. The tops of the fruit is pared off on the end so the visiting ancestors can easily enjoy the food.

After the ceremony is finished, it is then time for the living to feast on the physical food on the table; it is a period of delicious celebration. Most families will then make large bowls of bibimbap (rice mixed with various vegetables) and share in eating the side dishes and fruit.

Not every Chuseok is the same. Some families have many more settings for each ancestor they wish to thank, and a new setting could be added for a new member that has recently passed away.

And the idea of the celebration is not superstition; it is about respect and commeration. In America, we give thanks to a distant god, but Koreans give thanks to something more tangible. Where would we be without our parents and our grandparents?
If you are asked to join in on this festivity, accept it with humility and honor. You are not only being introduced to not only the living members of the family, but also those who look over them. 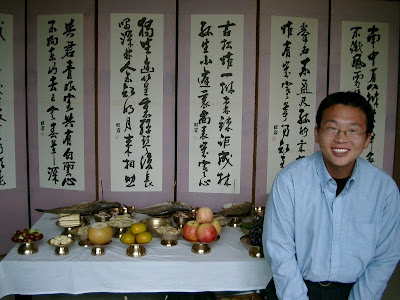