Korean Food comes to Costco in the USA

October 03, 2009
Thanks to Tammy of Beyond Koreanfornian Cooking for the tip.

Korean food comes to Costco
Korean food is becoming trendy in North America. Whether it's Debbie Lee, from last season's The Next Food Network Star, or Guy Fieri's strange version of kimchi — it features honey, tamari and apple cider vinegar — if you put the word Korean in front of your dish or call your cabbage pickle-type salad "kimchi," Americans seem to be willing to try it. 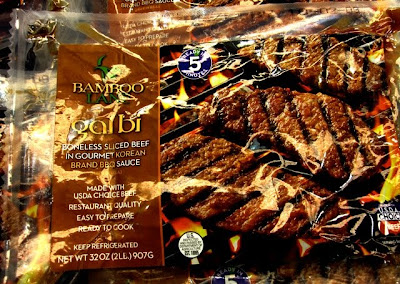 Another sign that a particular cuisine is gaining popularity in America is when you can find Americanized versions in large grocery stores, such as King's Asian Gourmet kimchi at Wal-Mart.

I found another large American grocery chain offering packaged Korean food. I've known for some time that warehouse club store Costco Wholesale has been selling a line of pre-made Korean meals, featuring galbi, bulgogi and a dish called "spicy bulgogi." (The latter actually is dwejikalbi, which is made from pork.)

But quite frankly, I didn't make a mad dash to Costco to buy them, because I already know how to make galbi and bulgogi. However, because of the recent media attention surrounding the South Korean government's push for the popularization and standardization of Korean food (hanshik), I thought I'd perform a public service and buy some of the Costco food items and let the world know whether these mass-produced Korean foods would make First Lady Kim Yoon-ok proud or cringe in horror.