The Amazing Korean Table on Visitseoul.net 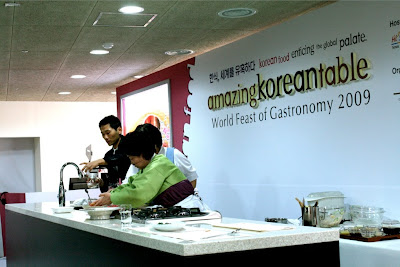 Here is the story that I wrote for Seoul Tourism. You can find it here.
http://english.visitseoul.net/visit2007en/aboutseoul/whyseoul/whyseoul.jsp?cid=46&sid=2448
Do me a favor and leave a comment on the above link because they help me live my life of food. Also, if you hit the link, you'll find many great pictures.

I was able to attend cooking classes held at the newly remodeled Korea House located near Chungmuro station. Han Bok-ryo, who is the top authority on Royal Court Cuisine, taught the first class, throughout which she emphasized the importance of upholding traditions. She demonstrated how to make an alluring stuffed cucumber dish, royal stuffed tofu, and king prawns with a cucumber pine nut salad.

Pierre Gagnaire, the ‘Picasso of the Palate’, came next. In the kitchen, Chef Gagnaire is a wizard and musician who transforms the properties of his food, rifting new notes into the dishes he prepares. He used omija - the five-flavored berry - with apples and butter, and weaved red beans into a drink. In the hour-and-a-half he made six dishes including foie gras with kimchi, a French/Korean raw beef dish, and a rice wine cream pudding with apples and sweet paprika.

Then it was the turn of Massimo Bottura, the owner of Francescana, Italy’s number one restaurant. He has been called the ‘Innovative Culinary Magician’, and also seems to be something of a showman since he enthralled every single member of the audience. In his cooking demonstration, he turned beet juice into tiny, solid, ruby cubes, mixed them into a risotto and topped that with ginseng threads. The showstopper was his barbecued raw beef served with black garlic mash potatoes. How did he make barbecued raw beef? He first charred vegetables black to add the barbecue flavor and put this on the outside of a filet mignon cut of hanwoo: Korean beef. Then he put the beef inside a vacuum-sealed bag and cooked it at 60 degrees Celsius for 40 minutes to prevent the blood in the meat from coagulating. The end product was a dish whose meat had the texture of being raw and the flavor of having being barbecued, without ever been near charcoal. I was fortunate enough to taste this near-transcendental dish.

Corey Lee, the former Chef de Cuisine of the French Laundry in Napa Valley, gave the final class of the day. Corey is one of America’s top young chefs and will soon be opening his own restaurant. One of his dishes was a variation on Korean dotorimuk: acorn jelly salad. Corey told us through video the process through which he chose acorns that were not too bitter, and how he used French techniques and modern science to create a new version of this classic Korean dish.

The entire festival was a huge hit and very beneficial to the culinary future of Korea. I’m sure that the young chefs who came to the lessons and participated in the cooking competition had their eyes opened to new possibilities by these world-class chefs. I’m hungry to taste what they’ll be cooking.