White Love in Lapland: A Post on Food Trends in Seoul 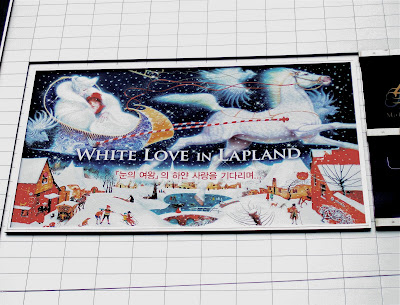 Yes, there is a huge sign outside of I'Park Department store that reads White Love in Lapland. Oh, Korea, I heart thee.

I was looking into my food crystal ball today and here is what I foresee in the coming months.

I see TGIF's closing and many family restaurants such as Outback, Bennigans, etc suffering because Koreans no longer see these as good values and the flavors being deemed to bland or heavy compared to regular cuisine cuisine.

I believe that brunch is on it's way out and it will be regulated to the expat market and that the prices of brunch will go down (I mean it should. Egg's Benedict shouldn't cost 20,000 won!)

I think that burgers will continue to thrive as beef prices fall.

Rotiboy and the Malaysian hot bun trade will slowly fade away and make way for cupcakes- unless they can figure out a way to make them edible when they are not hot. Seriously, have you eaten a cold Rotiboy bun? It's like eating cardboard with bits of lard- not pleasant.

The next hot trend will be cupcakes, but the trend will only last 6 months. Cupcakes are fun and cute, but they are too small and too expensive for most people. Come on, can you imagine spending 4, 5 or 6000 won for a little cupcake and then having to share this with a group of your friends? Cupcakes can't be shared and the reason Koreans like food, is for the social connections it conveys. BUT, I believe if there is a gourmet cupcake place that makes them for 2,500 won, they will succeed.

Another hot trend will be real deli sandwiches. I'm not talking about crappy sandwiches with sweet potato and artificial crab filling. I'm talking real artisan made meat sandwiches with sliced meat piled high on crusty bread. Pastrami is Korea's new ham (however, what they consider pastrami isn't what New Yorkers would).

Onigiri will become a popular new Japanese food trend, and Japanese Ramen (which was never really a popular trend) will falter.

Cute Bento lunch sets will start to become a fad in the next 6 months.

Contemporary Korean food will still not catch on.

Korean Royal Court Cuisine will still not catch on.

Makgeolli is already popular and will continue to be so to the detriment of wine. BUY WINE NOW, THE PRICES ARE RIDICULOUSLY LOW AS EVERYONE IS UNLOADING STOCK.

Teashops will still not catch on and coffee shops will. Coffee will continue to get better as people have gotten used to the good stuff. Starbuck's instant coffee packets will become a huge hit here. I mean HUGE. I had one and they are quite good.

Mexican food will continue to be moderately popular.

Korean food will still be popular in Korea.

Here is what I hope will happen:

1. I will be able to get a decent Banh mi sandwich.
2. The "Well-being" moniker will go away.
3. The All-American Diner in Itaewon will close and stop serving greasy, nasty food.
4. Sunshine Kebab will close as people realize that they are not a real Australian kebap chain.
5. Lotteria will serve up a Bestlo sandwich like Mr. Pizza has done (Best Selling and Best Lover). Basically, Mr. Pizza took the best selling pizza and topped it with the favorite ingredients. I wonder what Lotteria can do.
6. KTF will give me back my 500 won discount on Starbuck's coffee.
7. Menupan will close as people realize that they are an awful food website.

8. Roboseyo will bow down to my superiority.