The History of Coffee in Korea 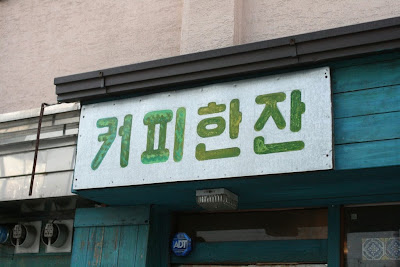 When I went to China for vacation, I found it extremely difficult to find a decent cup of coffee in “The Middle Kingdom.” It made sense, since China was--and continues to be--a tea-dominated society.

I have nothing against tea, but sometimes only a cup of coffee will do. 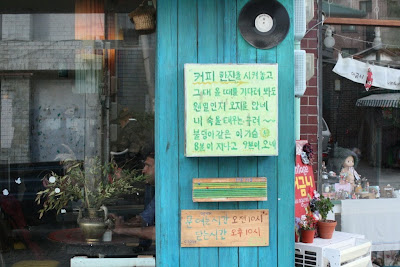 In Korea, you will not find a lack of coffee shops. You’ll find cafes on every corner, on the streets, and even in the smallest nooks. And if you are in need of more of an instantaneous caffeine fix there are numerous coffee machines dispensing sweet milky instant coffee.

Korea is a coffee society, but how did that happen? Prior to the turn of the 20th century, Korea was basically a tea-based culture. 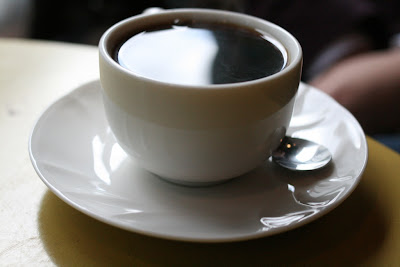 According to Professor Jia Choi of Ewha University, the popularity of coffee comes from a mix of different influences. One of the main influences was from Emperor Sunjong of Korea. Emperor Sunjong was the last king of Korea and he would often have western style dinner parties at the palace. They would have western style plate and silverware settings and food such as steak and potatoes or roast beef. They even sat in western-style chairs and were served on western-style tables. I know that you might think this might sound like a moot point, but before Emperor Sunjong every meal was served on the floor and tables piled with food were brought before the king.  So back in the 1920s, a western style dinner was quite revolutionary.

And after dinner, the Emperor and his father, Emperor Gojong would drink coffee. They were passionate for the drink and other members of nobility would join them as well. And since the king represented the idea of nobility and style, the common people started to drink coffee as well.

The Japanese found about the king’s affection for this drink and there was even a plot to kill the king by poisoning his coffee. Luckily, the plot was uncovered and the King wasn't killed. 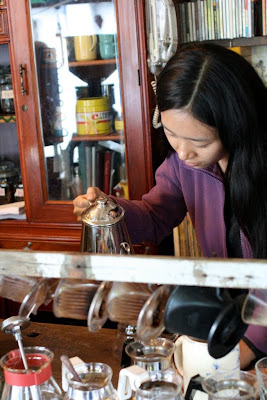 That might explain why coffee is synonymous with being a luxury drink in Korea, but Professor Choi has another theory: it matches the Korean taste. She believes that Koreans really like bitter and strong tastes like chili and kimchi. I agree with her because I have found many great coffee shops selling dark, robust coffees these days. I see many Koreans preferring black to coffee with cream and sugar.

One of my favorite places to get a cup is at Coffee 1 cup in Bucheon-dong. This shop is a tribute to coffee shops of old, which were called dabangs. Dabangs were known as places where new couples could meet and talk in secret. This dabang’s interior is a tribute to old: raw concrete walls scrawled with notes and covered in posters; there is also a chandelier made out of rainbow colored plastic straws hanging from the ceiling. 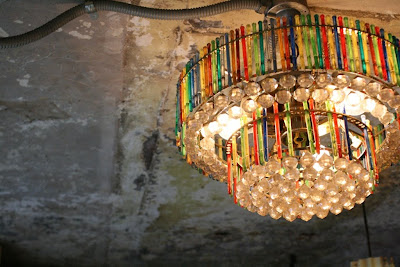 And the coffee?
The best that I’ve had in the city. They roast their own beans and, here, you’ll find Brazilian, Guatemalan, Columbian and Tanzanian coffee on the menu. They make a hand drip coffee that is as black as obsidian and warms you like a cashmere sweater. It’s alarmingly good.

One note. Here, it takes about 8 minutes to make your coffee because the barista fresh grinds your beans and then slowly drips in order to coax all of the flavor out of each bean.

I definitely recommend you go to Coffee 1 Cup (커피한잔).
Directions: Go out Anguk Station Exit 3(Subway Line 3) and make the left at corner across from the large Hyundai building. Go down about 3 blocks and you’ll see it on your left.