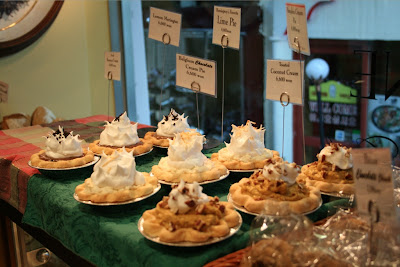 Paul Ajosshi said...
There once was a place called Tartine
Whose food made the customers keen
Their big fruity pies
Were a feast for the eyes
And the Beef Pot Pie Set ruled supreme!

Pamela said...
I was there on Sunday and had a pecan pie, a la mode! Yuuuuuuuuum! Not too sweet - just riiiiiight! and my friend had a blueberry tart which was also fabulous!

Bravo said...
I'm not writing any silly poems, but I am a starving expat in need of pie.

ZenKimchi said...
Flour of this awesome pie
Hit with Cupid's archery
Speak of apples in my eye
When thy crust I doth espy
Let it shine as gloriously as
Venus of the sky
If I wake when it be by
Will be a great hangover remedy.

Hey Dan, I've seen you post about Tartine several times. What really caught my eye was your statement about the rhubarb pies. The last time I had it was in May 2007 in Berkeley. Man, was it marvelous. Hoping to relive that this coming Friday^^

Directions: From the Hamilton Hotel, go right –towards Paris Baguette, or go straight from Itaewon Station Exit #1, past KFC [first alley] to the second alley, turn right. We are halfway up the alley on the right [look for the pies in the window].
Tel: 02-3785-3400
www.tartine.co.kr
contest dessert Itaewon tartine