Where to Watch the World Cup this Saturday

June 11, 2010
On Saturday, everyone in Korea will be watching the world cup game. So you are going to have stake out your spot early. Of course you can go to the COEX or to the CGV's (I heard they are doing the games in 3D!). 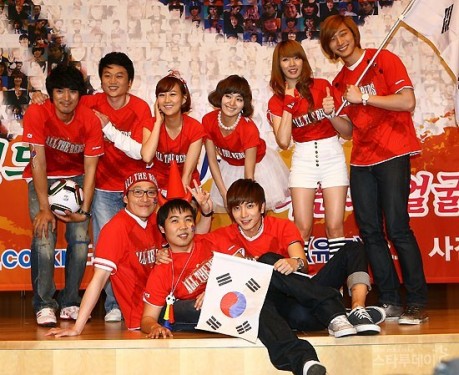 Rumors from Davesesl that City Hall Event is canceled, but I don't have a confirmation on this.

Ttukseom: The riverside stage at Ttukseom can hold 5,000 people and will host a World Cup cheering festival/viewing party with celebratory performances…including some famous singers.

Seoul Racecourse Park – This Park, in Gwacheon, hosts an outdoor viewing party with one of the finest high definition displays in the country. Be there on June 12th or June 17th to cheer with the masses. 123

Sam Ryan’s Sports Bar and Grill, Itaewon – these guys are promising to show every game – even the 3:30 a.m. matches (don’t act like you won’t be up at that time anyway)

Bars in Itaewon with the game:

Other Places in Seoul
Phillippe, the GM of the Park Hyatt Hotel in Gangnam said that occupants from the Hotel will be able to see the huge screens at COEX. Because of this, his entire hotel is fully booked for the weekend.

Outside Seoul? via Daves ESL

In Daegu I think they will play it on a huge TV in Duryu Park.