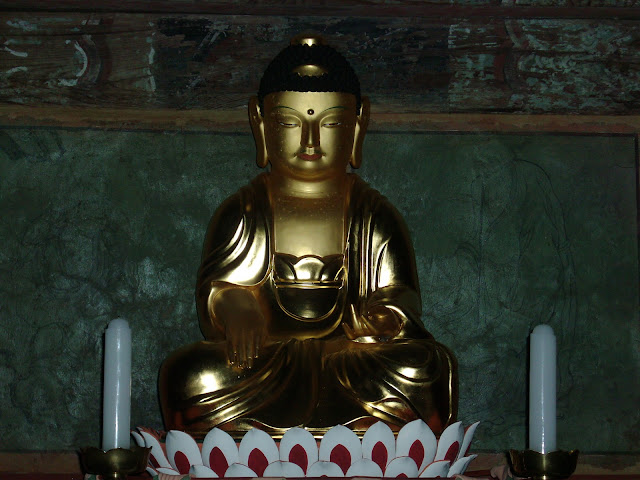 Monastery cuisine conjures images of the most meager and bland food on Earth: rice porridge, sparse vegetables and no fruit (reminiscent of Oliver Twist).

For my summer vacation, I traveled to Mihwangsa Temple, hoping to prove such notions were false.

Mihwangsa is located in the Jeolla province. The monastery is nestled on Dalmasan (Dharma Mountain), a ridge that stretches for 10 kilometers towards the sea.

The three-day-four-night experience shook up a few misconceptions of monasteries, especially when it came to Korean food.

A basic precept of all Buddhism is non-harm to sentient beings. This of course applies to food. Monks maintain a strict diet of vegetarian food, although it is more accurate to say vegan since rarely any animals products are used.

My first meal at the monastery was bibimbap, which included a small amount of gochujang paste, two handfuls of rice, and plenty of mountain vegetables, but without the usual fried egg. The same could be said of my sweet patbingsu (Korean shaved ice). Although the more modern addition of this summer dessert is served with ice cream or yogurt, Mihwangsa’s was dairy free.

As a vegetarian, each new meal made me a more adventurous eater. For the first time since coming to Korea, I allowed my taste buds to roam freely and carelessly without the worry of consuming meat. 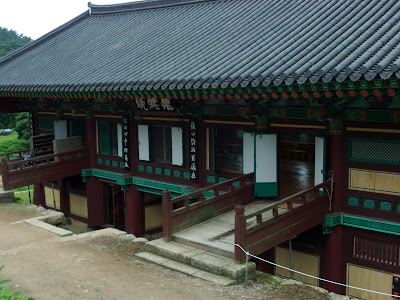 I tried new sides at every meal, and took extra heaps of the food I knew well.
I took seconds and thirds of Doenjang Jjigae, a hearty soybean soup that did not have an ounce of sea food. Rather, it was packed with rounds of thick tofu; and chunks of mushrooms, peppers, and hobak (green pumpkin).

Side dishes failed to scare me. Daily, I consumed stacks of pancake paddies and breaded vegetables. Each doughy pancake was a surprise; some were stuffed with tofu, while others were peppers, eggplant and hobak (again!). In one happy encounter, I found the starchy vegetable Nagiamo (Ma in Korean), a kind of yam breaded and wrapped in laver (seaweed).

Raw fruits and vegetables, too, accompanied many meals. Snappy green peppers picked from the modest Mihwangsa garden often joined the lunch table. For dessert, many nights ended with thick slices of watermelon or succulent grapes. On my last dinner, the kitchen prepared a slushy mulberry sorbet bought locally from the province. The mulberries, although frozen, still emanated a tart piquancy.

On the whole, the food tasted less seasoned (but certainly not bland) than other Korean dishes. Kimchi, which I usually consume with caution, did not contain garlic, scallions, or jeotgal (salted fermented seafood). Rather, this homemade variety was crispy and more peppery. Most meals I ate the entire dish and had to nibble from neighboring tables. The monks later boasted that none of their foods, especially kimchi, contain any chemicals or MSG. Jajangmyeon (black bean noodles) also tasted just as savory without all the salt. Rather than meat, the dish had diced a potpourri of mountain vegetables, including carrots, mushrooms, and peppers.

The only problem with being an adventurous eater (at a temple stay) is that you must clean your plate. An eater should not leave any remnants of food on their plate, even if it be a few morsels of rice. After my first dinner I was kindly, but firmly reprimanded by a monk. Although I was full, my plate remained littered with vegetables and rice. Later, I learned the procedural steps to properly cleaning a dish: first splash the plate with water (which must eventually be drank), and then clean it with a piece of speared damuji, which acts like a natural sponge (also eaten). Drinking and consuming the “dishwater” and “radish sponge” proved a humbling experience that reminded me how easy it is to waste food.

Any remnants from other meals is constantly being reused in upcoming meals. The aforementioned peppers out for lunch were later used to accompany a salad. That salad was in turn mixed to make a steamed vegetable medley for dinner. Nothing goes to waste in the kitchen of a monastery.

Thankfully monastery cuisine is a colorful and hearty fanfare of food marked with taste and variety. Each meal is imbued with home cooking love, and the kind of creativity that blossoms with conservation. In particular, Mihwangsa has given me not only the best temple stay I could hope for, but the best food I have consumed in Korea. . 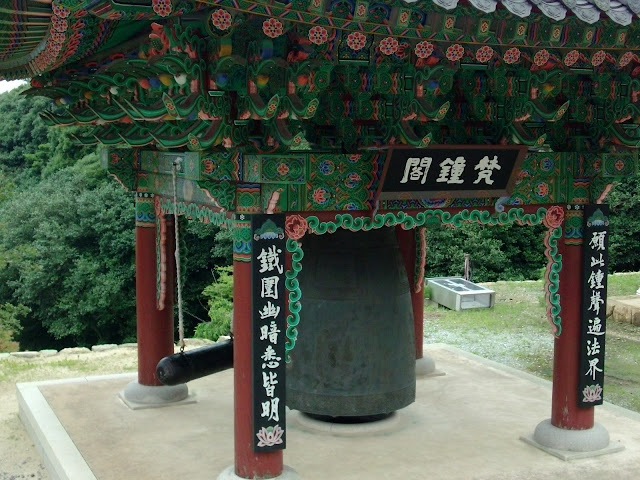