A Search for the Best Cheesecake in Seoul

If you are a lover of truly cheesy, creamy, thick, tangy, cheesecake… then you’re probably well aware of how difficult it can be to buy a satisfying slice in Seoul, or anywhere else in Korea. Perhaps you’ve experienced the familiar disappointment one too many times. You see cheesecake on the menu, or at the bakery, and the idea of that velvety deliciousness you know so well plants itself firmly into your brain until you can’t resist. You eagerly order your indulgence… only to push your fork into it’s pastel surface and realize that it’s far more ‘cake’ than ‘cheese’, and again you feel duped. We can empathize. However, do not lose hope completely… it IS possible to find the real thing in Seoul. On the ultimate quest to search for the best cheesecake in Seoul, two true cheesecake lovers sampled some delectable options and have decided to share their knowledge here with any other kindred seekers.


5. To satisfy a curiosity, and because it has a reputation for serving up respectable cheesecake in Korea, we decided to give Outback Steakhouse a try. Our curiosity was indeed satisfied, though without much flare or fanfare. Certainly, it fit the basic requirements of a real cheesecake… it had the thick and creamy consistency one looks for, and for the traditionalists out there this one was baked, with a crust. Yet, the taste sensation left much to be desired. Mild, sweet and fluffy could describe it, with little to none of the zippy flavor that a true cheese filling should possess; and the crust tasted simply of a frozen pie crust, with none of the buttery, crumbly, or crunchy crackle that the best crusts should provide. Pretty average, overall.

4. Moving up slightly, we find ourselves in Apgujeong at a well-known Italian restaurant by the name of ‘Mad for Garlic’. High were our hopes for this tasty eatery, but disappointing was the reality of their attempt at the delectable dessert we craved. Similar shortcomings arose: nice silky texture, but without the flavor panache. It’ll satisfy the urge in a pinch, but far better options are out there. 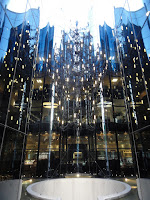 3. Landing in the middle of our ranking, ‘Passion 5’ near Hangangin Station manages to create a well-appreciated offering of sweet cheesy goodness. This popular bakery is a world unto itself. Everything about it, from the sleek black modern exterior, to it’s polished décor and contemporary design, to it’s luxurious baked goods and bountiful display cases… screams decadence. Amidst the heaps of extravagance around us, we managed to locate their cheesecake and order ourselves a slice. Their version turned out to be a considerably tasty, traditional NY cheesecake. Of all the options, this is probably the most successful conventional form. The crust, and texture hit their mark. And the cake itself was rich and velvety… if lacking a bit in the tanginess that we were seeking.

2. Getting closer now to the real thing, we move on to a popular Italian restaurant in Itaewon. ‘La Bocca’ provides its customers with a lovely, more upscale, atmosphere, and it provided us with its very own delicious cheesecake concoction. A fancy presentation was the first notable aspect of their version; the round crusted cake came topped with fresh currants, and the plate came artfully smeared with currant syrup, dotted with a buttery cream, sprinkled with crushed pistachio, and accompanied by a nutty fudge cluster. On the taste scale, this cake scored well. The texture was smooth and creamy, it contained some of the rich and tangy flavor one looks for in a masterful cheesecake, while also offering a lemony zest to finish off the palette’s experience.

And, the #1 Cheesecake in Seoul is found at…….
1. ‘Decoa Balim’ in Hongdae. Intending to visit ‘Muy Bien’, (a café that bloggers had claimed to serve up some of Seoul’s finest cheesecake), we were disappointed when, after 45 minutes attempting to find this supposed gem, we were told that it was no longer in business. In order to make the trip to Sangsu/Hongdae worthwhile, we decided to check out another dessert shop that a friendly wine bar employee suggested to us. There, we found it. In this cutely decorated, conveniently located, and little known dessert café, lies the very best cheesecake in Seoul. Though their cheesecake looks deceivingly like an improper interpretation of the genuine article… do not be fooled by its nontraditional presentation. It might not be for the staunch traditionalist; it’s served in a latte shaped mug and there’s no crust. Yet, for anyone who can bypass the crust in favor of the smoothest, most flavorful, mouth-watering, and taste stimulating cheesecake experience… this is the place you want to go to. It’s the kind of culinary experience that makes you involuntarily murmur your approval every time you lift your spoon to your mouth and clear it of it’s irresistible contents. 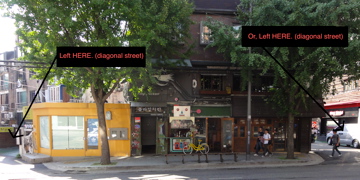 To get to Decoa Balim, take Subway line 4 to Sangsu Station and leave out of exit 1. Turn 180 degrees after exiting and walk left down the road that exit 1 and exit 2 straddle. When you reach the bar called ‘Vinyl’, take your next hard left (diagonal to the street you’re on, not perpendicular). Walk a short distance and look for Decoa Balim on your left. (There’s also an entrance from the diagonal left that’s just BEFORE you see Vinyl.)

Thank you Laura and David for that fabulous review. If you would like to contribute to Seoul Eats, please contact Daniel Gray at seouleats at gmail dot com.