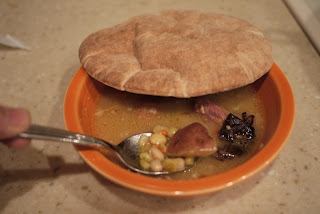 I love to cook and I used to do it professionally, but these days I really don't get much of a chance. Between work and all the restaurants I have to review, I don't really have an opportunity. (This might also have something to do with all the weight that i have gained.)
Anyway, when I went home, I decided to do a lot of cooking for my family. My parents are retired and living in Florida so they like things simple and easy. The BBQ grill is the equipment of choice or a terracotta microwave bowl that you can roast a chicken in 25 minutes (For real, it exists and it works pretty well). I like to cook with what I have and there were lots of toys for me to play with in my parent's refrigerator.
For example above is my ham-hock soup with lima beans. We had the ham bone leftover after eating our honey baked ham so I threw it in a pot with onions and carrots and stewed it until the marrow just oozed out. The soup was delicious for it had a hint of maple, smokiness from the ham.
Next up is my pizza fruit tart. I made a crust from flour, sugar and butter and baked it up. Then I made a sweetened cheese filling with cream cheese and topped it with fruit they had in the fridge- oh, wait. I had to borrow the strawberries from a neighbor. On top is a orange glaze I made from orange juice, sugar and corn starch. 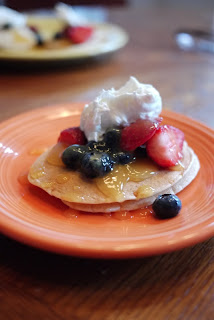 The next morning there was quite a bit of the fruit mix from the dessert the night before so I made fruit pancakes with a orange glaze in the morning. This was really refreshing and delicious- especially with a dollop of cool whip.

Now the last night of my stay, I decided to throw a dinner party for my parents. I couldn't figure out what to get them for Christmas (they didn't like my idea for a bidet...they already had a Kindle...and they told me I was not allowed to go crazy buying gifts for them), so my present to them was a dinner party for them and their friends.

Before arriving in America, I had packed my bags with all the essential sauces and ingredients that I knew I wouldn't be able to get in America and prepared a variety of different Korean dishes.

For dinner I made daktoritang (Red Spicy Chicken BBQ), bulgogi, japchae (glass noodle salad),  bean sprout side dish, spinach side dish, and a cucumber side dish. It was a lot of food, but I was able to pull it off in about 2 hours. So did these old folks like what I made?

I think so, because dinner was pretty quiet at first. Many of the people at the table never had had Korean food and they said they liked the vegetables and the meat dishes. They especially like the daktoritang (even though a few said it was super spicy.) It was a good time and I really enjoyed doing it.

A dinner party for a christmas present, not a bad idea. It could become a new trend. 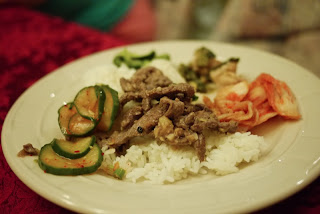 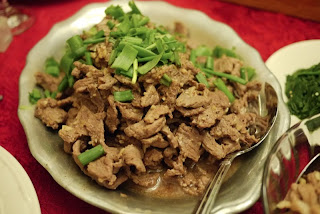