February 05, 2011
It’s not delivery…
Written and Photographed by Jonathan Bates
It was just another blustery and frightfully cold weeknight when I got a call from a friend to come meet him. I knew what this meant (beer and pizza) and without him even touching my rubber arm, I contently acquiesced. I had heard about some good pizza in Itaewon from a few friends about a place called The Crow’s Nest – so we said “eh, why not?” and decided to meet there. 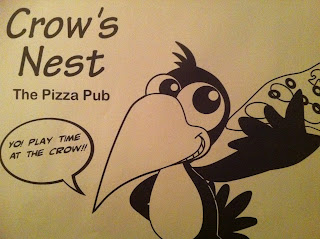 Walking up the frigid stairs to the pub, the first thing I noticed was the window in the stairwell giving the perfect glimpse into the kitchen where you could see the cooks at work. It was like the pubs rendition of the infamous Krispy Creme “tour” you could go on in the States (only you don’t get a free pizza at the end of it). Walking in, it had a very fresh feel to it. The tabletops were all painted in neon colors and the walls splashed in white and covered with various memorabilia. In my opinion, it felt and looked like a mix between a child’s playroom and a modern pub. At one end of the pub was a medium sized bar and a few large screen TVs mounted to the wall playing various sports games and matches.

My friends and I were seated quickly and it only took us a few moments to decide that we came for the pizza. The variety of pizzas was good – you could even pick and choose your own toppings. When it came time to order, we asked the waitress if we could do half pepperoni and half mushroom and pepperoni. Dully, she said “no.” Being visibly shocked at the refusal of what I can only assume is a common question, I politely asked her to see if it was possible. Almost immediately the owner came out and said that it was absolutely “no problem” but that the extra topping would be a scant 3,000 won. Easy as pie (pun intended), I thought. While we waited we enjoyed a pitcher of beer and some soju over a soccer match. In a matter of minutes our pizza came out! I couldn’t believe how fast it was. 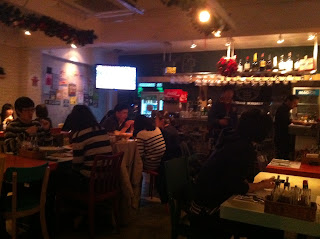 The pizza itself was gargantuan size of American proportion. Luckily we only had three people at our table because the pizza literally took up more than half of it. It looked and smelled delicious – just like a pizza from back home. The crust was nice and thick on the ends and of medium width under the rest of the pizza. It was pleasantly cheesy and was adorned with a bounty of pepperoni and mushrooms on it, which in Korea is a rarity. We steadily polished off the whole pizza and were left feeling stuffed and wanting more drink. After, the owner came over to ask how it was. He certainly got no complaints from us.

Considering that the place was nearly packed and it was only a Tuesday was a good first impression. As home to Korea’s largest pizza, my expectations were high. I was hoping I had finally found a place to have pizza like the pizza back home. I was victorious in that respect. Even despite the frightfully chilly bathrooms (they weren’t heated) and the less-than-flexible waitress, I will definitely go back for more.

This place definitely knows what it is doing in terms of its pizzas. However, if pizza isn’t in the cards for you they also offer a myriad of salads and pastas. Pizzas ranged from 16,000-26,000 won, add 3,000 for every additional topping you choose to add to your customized pizza. Salads and pastas range from 12,000-22,000 won. They have a fully stocked bar that serves everything you could want to wet your whistle. Tuesday night is ladies night; between 7 and 9 pm all ladies get one free drink.

How to get there. Take line 6 to Itaewon Station, exit 2. Out of the exit take a left at the first alley and then a right at the end of that alley. The Crow’s Nest will be on the left about 20 meters. The pub is located on the second floor – you can’t miss the sign. Phone: 02-749-7888.