Have your Shellfish Steamed or Grilled 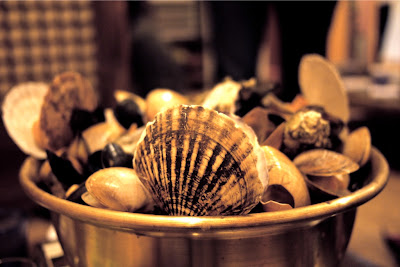 By Daniel Gray
Finally, I have found some modern cuisine in Korea that doesn’t date back to the Shilla or Chosun dynasty with roots to royal court cuisine. Steamed shellfish and grilled shellfish don’t have a long history. According to food historian, Professor Jia Choi of Ewha University, “it became popular in the early 90’s and died out around 96-97. When they were popular, you could see these restaurants everywhere and everyone thought it was going to be the next big thing, but then they just died out.” So I asked Professor Choi, why she thinks they died out and she said, “Restaurants need to do business all year long and not many people want to eat shellfish in the summer so…it’s not a good concept.” 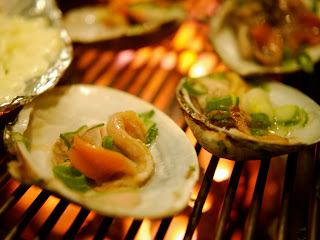 In winter, I get a hankering for shellfish. It’s when they are in season and freshest. Normally, I prefer grilled, but a friend introduced me to steamed shellfish over at Gyomokgil in Nonhyun-dong and it was a breathtaking, culinary experience. A huge bowl of shellfish piled high with black mussels, smooth cherrystone clams, elegantly fan shaped scallops, rough textured kumamoto oysters, small cockles, and even a spiraling periwinkle sea snail. Every shell seemed to have just opened their eyes as if they were catching a glint of the morning sun. As we picked through each delicious shell and enjoyed the sea-salted meat, we discovered beneath was a behemoth black shell that was almost a foot long. The waitress had to come over and slice it up so we could eat it. The meat in the black king clam had the texture of lobster, but with a scallop taste. Delicious. 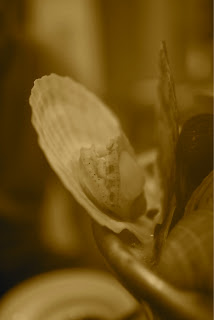 As we were fighting for the remaining shells, the waitress came over and asked us if we wanted plain noodles or kimchi noodles. We said we wanted kimchi noodles. Now in that big bowl that had our shellfish, there was a metal colander that kept the shells out of the water and let the delicious juices drip beneath. This was the stock that the restaurant was going to make our noodles with. Needless to say, but it was delectable. The broth made from all the different types of shellfish thickened from the starch from the noodles and spiced with kimchi was the perfect dénouement to the meal.


After my meal, I felt torn about my former love: grilled shellfish. So I decided to revisit her to make sure what I felt was right. I headed over to Hongdae with a friend to Dalryeora Chogae-gui. The place has a brash hip-hop feel with wicked sense of humor. For example, they announce that if you mimic the cute, yet lewd, pictures between a boy and girl on the wall, they will give you a bottle of soju.

I find that grilled is just as good as steamed and I liked the attentive service from the young guys that roast each scallop and clam with swagger. They roast each one and pour the juice into little soup bowl in the center of the grill before inviting you to eat the cooked meat. I think this is what I like most about grilled shellfish- it cooks in its own juice and are smoked by charcoal. Oh, and vingered red chili sauce is the ultimate condiment for all seafood for it accents the fish without overpowering it.


Besides making the ultimate clam soup, Dalryeora Chogae-gui has a few other tricks up their sleeves. They grill the giant black clam with mozzerella cheese and it slowly becomes a gooey seafood fondue. They also put a sliced up hotdog on the grill- a homage to America I suppose, and they roast sweet potato wrapped in aluminum foil next to the coals- a delicious way to finish the meal.


So…is the shellfish trend returning? That I can’t say. For as delicious as it is, it is not a very filling meal. I do enjoy this in winter and I suggest you give it a try for it is something truly, uniquely Korean.


Golmokgil 골목
Gangnam-gu Nonhyeon-dong 67-25
02-544-7757
Price: 15,000 per person
Directions: It’s best to take a taxi to Nanuri Hospital (나누리병원) and walking down the alley next to Done Zone. Walk about 5 minutes. You’ll see it on the left. On the second floor, around the side of the building, there is more seating.


Dalryeora Chogae-gui
369-4 Seogyo-dong, Mapo-gu, Seoul
Price: 15,000 per person
Directions: From Hongik University Station (Line 2), go out  exit 9 and continue until you hit a large 4 way intersection; cross the street and turn left. Turn down the second street on your right next to Tony Moly. Continue walking, and eventually you should see Dallyeora Jogaegui Pocha on your right.
Come take a cooking class or take a Culinary Tour in Seoul! http://www.ongofood.com
Pictures are taken either with my Panasonic DMC-G2 Camera with 20mm Lens or with my iPhone 4G
hongdae nonghyun recommended Shellfish