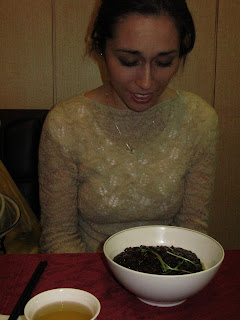 Another Black Day, April 14th is here and I wanted to share with you with a great column written by Lindsey Huster. First of all, I would like to say thank you to Lindsey for continuing to write these great columns for Seoul Eats. By-the-way, Lindsey, you can find your column in print this month in Groove Magazine. Well here is her story about how we should abstain from Couple's Holidays.  Also, Seoul Eats is always looking for contributors. If you would like to submit a restaurant review, photographs, or thoughts on food- just send me an e-mail at seouleats (at) gmail (dot) com

Another 14-fête has adjourned, and the streets of Seoul are smeared with post-celebrants of another twosome day. Pink and claret hearts hang flaccid, while neglected stuffed bears continue to grow damp in the puddles of rain (and perhaps the bleeding hearts of the solo Seouls of Korea).

Although the 14 is hardly auspicious - considered one of the unluckiest numbers by many cultures (4 being closely related to death) - it is the chosen day to partake in holidays that focus around love, or rather, a culture of candy, consumerism and societal pressure that encapsulates the Korea myrmidons of marriage.

For the victorious who have escaped the curmudgeon chiding, there are the sweet winnings: the white chocolate, the dark chocolate, (really, any kind of chocolate is always a reward), and the copious amounts of candies and cakes. For the losers of the bunch, such embittered singleness can only be satiated with the darker foods of life, as well as dulling efforts of Soju.

For each new month, there is a new occasion to display such food adorations or wallow in the supposed loneliness that results from it. The most recent occurrence is White Day. White Day began in 1978 in Japan, and has since spread to South Korea and Taiwan. The holiday was coincidentally initiated by the National Confectionery Industry Association, and is considered an "answer day" for men to repay women who bestowed on them the love of chocolate on Valentine's Day.

For the hapless multitude who must sit on the sidelines, there are the few days of consolation. April 14 is Black Day, a day to burry the bitter taste of loneliness into a bowl of jajangmien or black noodles, and other ebony edibles. If there is no time in April to celebrate sadness of the discomfiting, then try the following month on Yellow Day, a time to gather the singletons for some yellow curry. Later in the season is Green Day (August 14), a time for couples to adorn their attire in green and promenade through the forestry of Seoul, while the remainder of singles should satiate their sorrows with a emerald-gleaming bottle (or two) of Soju.

Although not as widely celebrated, the remaining days of 14 are meant for couples to continue to express their monetary commitment. January 14 is Diary Day, followed by the epitomes Valentine's Day in February. Other holidays include Rose Day, Kiss Day, Silver Day, Music Day, Photo Day, Movie Day and Hug Day. As might be expected, such holidays obligate couples to exchange the aforementioned object.

Unfortunately most of these holidays fail to celebrate the mystery and exhilaration that comes with love. Rather, the 14 is a day every month that celebrates bakeries, candy companies, and movie theaters. Like most holidays, White Day focuses more on the gifts rather than the meaning behind the gifts. Unlike other holidays, however, White Day is a newer holiday without a extensive hoary lineage to fall back on; it's a holiday that began with a candy company ends with a lucrative marketing strategy.

Even holidays like Christmas, however, that once were tagged as family events are now celebrated as an annual date night. Beyond Christmas cakes and ice skating dates, however, remains the throbbing familiar stress that encompasses the connubial expectations of family members. Holidays like Chinese New Year and Chuseok are furnished with dunning grandparents and in-laws who want nothing more than to see their children's children married and with children.

Bravo to those brave enough- both couples and single alike - who abnegate this showy frippery of monthly holidays. An even larger ovation goes out to those who continue to wait for someone they love, rather than someone who is convenient and appeases the family expectations. If you thrive on the attention of pink hearts, oversized teddy bears and chocolate, celebrate, if you must, these incessant monthly reawakening of lovey-dovey. It would be preferable and more economical, however, to send a check directly to the Lotte Department store and the local bakery to save time.

Lindsey Huster a writer who usually hails from Chicago. She enjoys listening to music,wearing cardigans and generally anything vegetarian. You can follow her on her blog: http://www.teachkoreatips.com/

Pictures are taken either with my Panasonic DMC-G2 Camera with 20mm Lens or with my iPhone 4G
Join the Seoul Eats Facebook Group Page to keep to date with the latest events.
black day lindsey huster