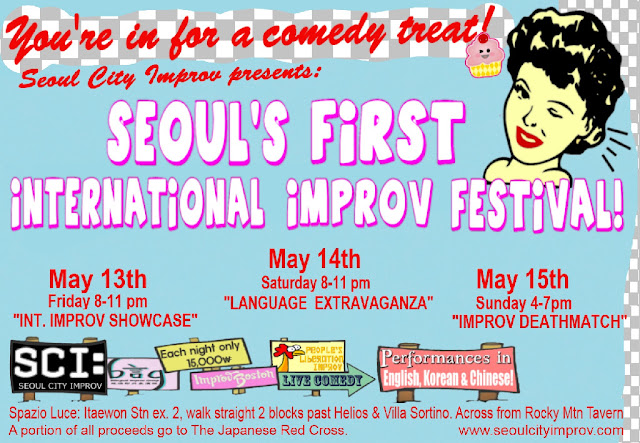 My good chum, Maggie Whittum and her comedy troupe: Seoul City Improv is hosting Seoul's First International Improv Festival bringing teams from all over the world to Seoul. Featured comedy troupes include:


It looks to be an exciting event filled with exciting improv comedy and conveniently located in Itaewon.


Here are the details:

Our opening night show kicks off with performances from all of the troupes involved. Get to know the performance styles and quirks of all our visiting troupes as they perform a variety of short-form improv games a la "Whose Line is it Anyway?" as well as long-form improv, which is like improvising an entire short play!

Improvised theatre in multiple languages from different cultural perspectives! Come check out improv in Korean, Chinese, English, Spanish and more! Even if you can't speak all of the languages, you can still enjoy the different takes on this performance style! After-party at Roofers Bar & Grill!

Sunday, May 15th 4-7 p.m.:
IMPROV DEATHMATCH
Members of the different troupes will be split into two teams that engage each other in an improv competition of epic proportions! A panel of judges and audience votes will determine who is elevated to eternal glory, and who sinks to the bottomless pit of defeat!

Directions to Spazio Luce: Itaewon Stn ex. 2, walk straight 2 blocks past Helios & Villa Sortino. Across from Rocky Mtn Tavern lies Spazio Luce, with an angular frosted glass facade. The theater is B1, & on the 1st floor there is an Italian restuarant which offers 10% off (on food only) for show attendees.

Pictures are taken either with my Panasonic DMC-G2 Camera with 20mm Lens or with my iPhone 4G
Join the Seoul Eats Facebook Group Page to keep to date with the latest events.
events friends Itaewon