May 02, 2011
Rating 2 Stars: Recommended (Spicy Garlic! Good Chicken Broth and Samgyetang. Good Value for Money. Service could be more polite.)
Samgyetang is my gloomy day food. I guess it's because when I was sick or when it was really cold, my mother would make chicken soup with Dutch egg noodles. Hit with a touch of pepper, it was one of my favorite dishes growing up.

In Korea, I've had to get a substitute and my Korean equivalent is Samgyetang: Chicken and Ginseng Soup. This dish can be great or average (it's really hard to mess up this dish). Of course the best places for samgyetang have amazing broth.

Mu-gyo Samgyetang in Insadong does have great broth and their chicken is quite good. For 12,000 won, it is excellent. I can't say it is the best version that I have had, but it is darn tasty. The place has 39 years of history, so they have a good formula for the dish. Of course, what really stands out at Mu-gyo is the spicy garlic. This side dish brings tears to my eyes and gives me an endorphine high because it is so potent.

I'm not sure exactly how they do it, but man is the stuff painfully good. This, next to the golden chicken broth is a contrasting pairing that works to balance themselves out.

The other great thing about this place is their lunch special. You can get Chicken Gomtang which is a soup with rice and sweet potato noodles. It's a good fast lunch and at 4,000 won a bowl, it doesn't break the bank.

My only complaint about this place is the service- it could be nicer. Then again, the place has been around so long that maybe they don't feel they don't have to. I went in on a Saturday to ask for the Gomtang and the lady berated me for asking for it and treated me like I was a beggar or something. It didn't make my dining experience very pleasant. For my honor, I felt like I had to order the Samgyetang.

I went back for the Gomtang on a weekday and the woman treated me the same way. Hmmm...I guess they don't like serving the dish. But honestly, what they should do is just charge more for the dish (duh!). 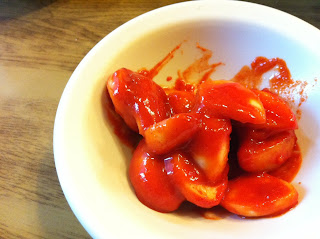 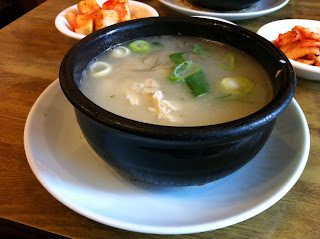 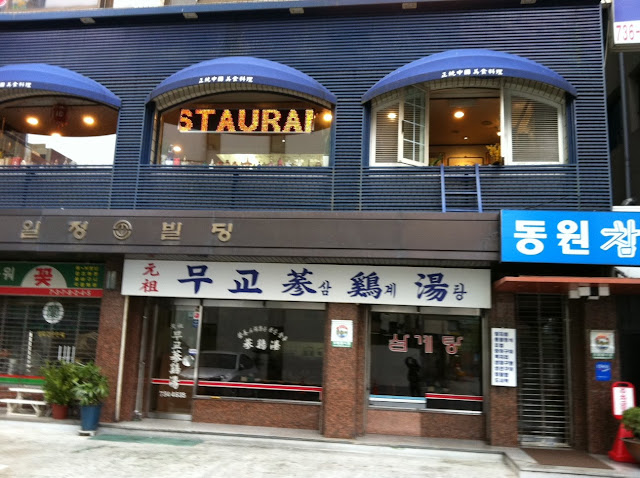