The Origin of Patbingsu 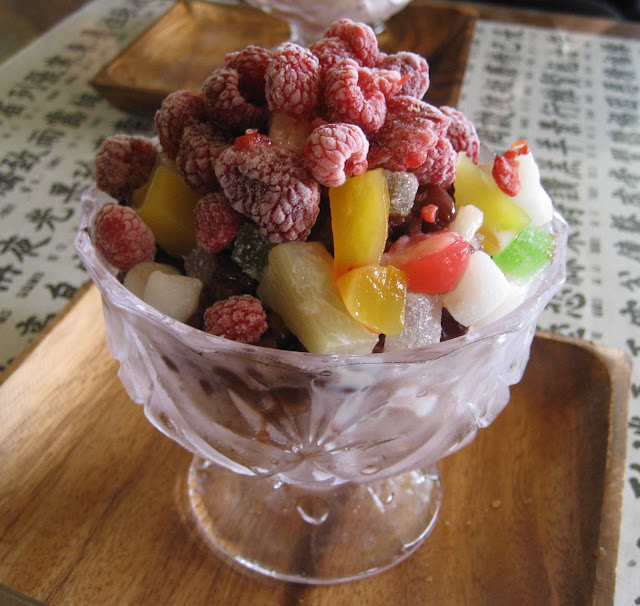 With Summer about to be in full force, I am looking for ways to cool myself down. The best way I have found is with something cool and refreshing. My blood is not 2 parts mulnaengmyeon (chilled buckwheat noodle soup) and 2 parts Korean ice cream and patbingsu. The other 6 parts are just my regular diet of rice, soup, soju, beer etc- not necessarily in that order.
These days, I have had a pressing question in my brain: what is the origin of patbingsu?
The debate on the internet goes that it has roots in Malaysia or China and then we have Koreans assert that it is uniquely Korean.
Of course, there are variations of this snow ice dessert in other countries, but if you look at the classic patbingsu. You have fruit cocktail, sweetened condensed milk, corn flakes, and ice during summer. Could this been a dessert to have started during ancient times?

According to the Korea Herald, during the Joseon Dynasty (1392-1897),  "Seobingo ― the government office in charge of the royal ice box ― would share ice with fellow officials, who would enjoy it finely crushed and mixed with fruit for a granita-like dessert."

So, I guess it was something that only the privileged could have. The story places the origin at the famous bakery "Tae Keuk Dang." This place is famous for their ice cream sandwiches (I've had them and they taste like sugary, watered down milk with a hint of vanilla. It's nice that it's not overly sweet, but it is nothing that is mind-boggling.) Their patbingsu is better. This one has lots of milk over crunchy ice topped with red beans and fruit cocktail. The best part of their patbingsu is the corn flakes and the sweet and chewy rice cake candy.
There are variations of this dish such as green tea patbingsu (the one at Neal's Yard is outstanding) and coffeebingsu (Cafe de Coin is awesome), but the old-style patbingsu that has milk, beans, and roasted bean powder is a fake.
That is a modern interpretation of what an old patbingsu would be.
Why? Because people didn't have the ice back then to make this dish.
I asked a number of older people at a cafe in Jongno this afternoon about this and they started a very excited debate about this dish. The topic of patbingsu was very dear to them. And they all had their opinions of how this dish started. What they agreed on is that the modern version of this dish has its origins after the Korean war and during the US occupation.
They said that this dish was made from the USA surplus supplies and were first sold at street vendors and later at cafes. It was a way to beat the heat and to offer a sweet to the changing diet of Koreans that began to develop a "sweet tooth."
Huh, pretty interesting stuff.
Here are the main ingredients for this dessert. The full recipe and video can be found at Aeri's Kitchen here.

Pictures are taken either with my Panasonic DMC-G2 Camera with 20mm Lens or with my iPhone 4G
Join the Seoul Eats Facebook Group Page to keep to date with the latest events.
desserts korean food patbingsu