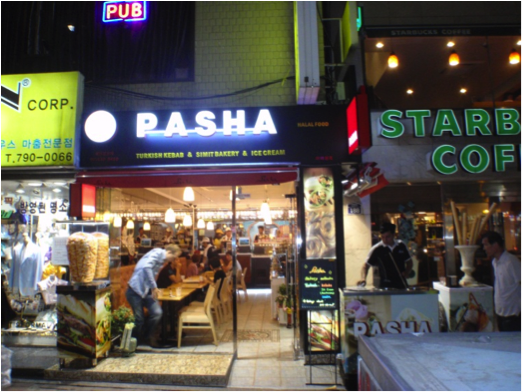 Written and Photographed by Troy Zitzelsberger

A new restaurant in a competitive neighborhood can go either way. They could work very hard and prove themselves worthy of the consumer’s patronage by bending over backwards in order to please them. But on the flip side, they could also lack in the experience department which may lead to them to fall short of expectations.

However you want to view it, there are only two sides to this coin. This leads me to the second stop on my search for the Kebab Raja, the new kid on the block, Pasha. Being the gentlemen that I am coupled with the fact that they just opened their doors, I’m going to give them the benefit of the doubt.

I ordered the beef and lamb kebab (₩ 5,300). The positive: the tortilla shell was thin so I didn’t feel like I was eating at a Mexican restaurant and there was also a good amount of fresh vegetables. The negative was that they lacked in the meat and sauce department (disappointing would be an understatement, annoying would better apply here). The meat inside the Kebab was so minimal that the term “teaser” couldn’t be applied here and the meat was as parched as Rosie O’Donnell in the middle of the Sahara Nevada.
The sauce, I’m sad to say, was pre-packaged which leads me to the conclusion that it is as unauthentic as it gets. I do have to give the subpar hot sauce props because without it, the dry meat would have been hard to get down.

I would recommend Pasha for vegetarians or those that just like a smidgen of meat. I on the other hand am a carnivore, so the search continues…

I hope that Pasha will listen to their patrons and improve for they have a good location and there is a demand for kebab. I'll give them another chance later.

Pasha is located in front of exit 3 at the Itaewon subway stop on line 6.

Pictures are taken either with my Panasonic DMC-G2 Camera with 20mm Lens or with my iPhone 4G
Join the Seoul Eats Facebook Group Page to keep to date with the latest events.