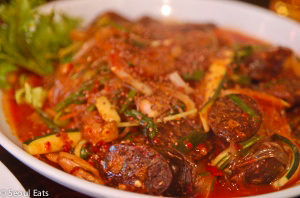 Some times you just crave some thing spicy and I think that I have finally found it.

GOP CHANG BOKKEUM!!! Finally, I have found a spicy dish that can make my mouth feel like a kiln.

Of course, I’m still searching for the fare that can take it up to the incinerator level, but this will do for now. Gop- chang bokkeum (₩ 24,000) is a spicy stew made from intestines, soondae (intestines stuffed with noodles or rice and pig's blood), various veggies (onions, zucchini, and onions), vermicelli noodles and chili peppers all fried together in a large wok right at your table.

It was a bit much for my Korean friend to handle. I grinned and let out a devilish chuckle as he attempted to cool his mouth off with water. What he needed was milk, but there was none in sight. So he settled for Makgeolli which, surprisingly, did the trick. 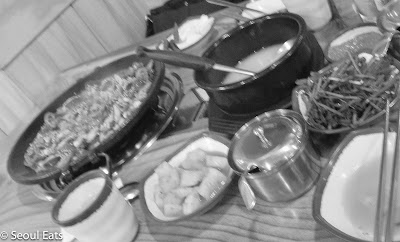 For me, this Gop-chang bokkeum was just spicy enough to delay my desire for fire. On the scoville heat scale, I would rate it between 45,000 and 65,000 (a little spicier than tabasco sauce). I’m looking for something over a million. My desire is for something that can melt my face off. This I would consider a great meal.

The meal that we ordered was enough to feed 3 normal people or two hungry men- which is not bad for 24,000 won. The "ban chan" that it was served with contained the best kkakdugi (square radish kimchi) I have ever had. It had a slight hint of chili pepper but maintained the flavor and crunch that white radish is known for. 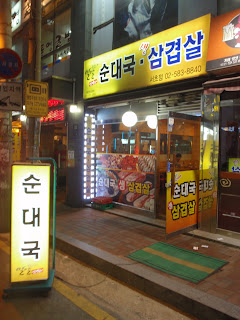 All in all, gop-chang bokkeum is a delectable dish that I would recommend others to try when it is cold. It will warm you up from the inside and the nice mess of things all in the pot make for a great meal.

Now, if anyone has any recommendations for me on my quest to find Seoul’s spiciest food, please leave them under the comment section and I will be sure to put them on my list…

Soondaeguk Samgyeopsal
Seocho-dong 1601-1 28 Hyoryeong-ro 55 gil,
#02-583-8840
Directions: Located within walking distance of the Nambu Bus Terminal. Walk out exit five and take a right, it will be on your right within 50 meters.

Troy Zitzelsberger originally hails from Michigan but has lived in Chicago, New York City, Germany, and now Seoul. He is working as an actor (really, no joke) in Korea and he humbly calls himself, "an unofficial food critic." You can find out more about Troy here.
nambu terminal troy zitzelsberger