But, that is not the problem, the problem is that when you build a new line that is connected to an existing station, there is no reason to renumber all the exits.

When you do this you cause thousands of people to get confused and you cause everyone to get frustrated and they want to starts stabbing! Now stabbing is not good and many kids carry box cutters for school so they would kill most of the adults and then Gangnam would be in the hands of stressed out kids that study too much in order to make their tiger mommies happy.

What I propose is that in the future you should keep the existing numbering of the subway stations. Let's say that Gangnam is numbered 1-8. If there are new stations, they should continue the numbering so it should be 9-12 or 13 or 14 all the way to infinity. This new numbering would make the new stations seem special and people will want to go there because they will be all shiny and new.

There was no reason that Hongik Dae exit 5 had to become exit 9. It could have stayed exit 5. It would have kept people happy and not walk all the way to another part of the city to later find that exit 5 is blocked off and even if you tried to get there you couldn't and there were only stabbed people near the exit!!!

Korea, I am happy we had this talk. I hope you can do better next time. 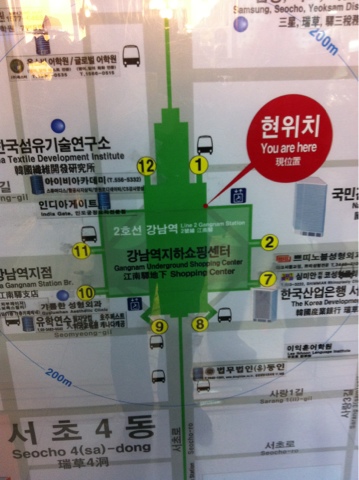