June 15, 2013
By Daniel Gray
www.seouleats.com
There are things that I miss about American Summer. I miss the jangling sound of "Pop Goes the Weasel" that drive little kids to beg, steal, or borrow change and then sprint towards roving truck dispensing frozen confectioneries. I miss huge cups at the 7-11 that I could fill with a mixture of exotic frozen Slurpee blends like Super Sour Watermelon, Arctic Blash, and Blue Woo-Hoo Vanilla. And I miss big hulking salads topped with the summer's plenty.
Even though there are no Slurpees, ice cream trucks, or big salads in this country, there are plenty of other ways to chillax (chill and relax). As the Seoul sun has been heating up these days, I've made it my mission to find foods that fight the heat wave. Here are my top ten suggestions. 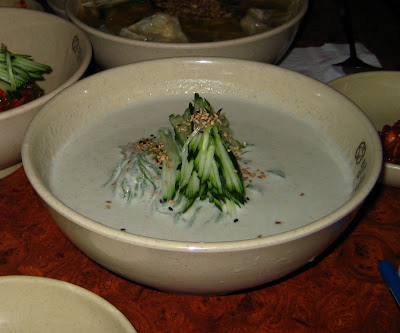 10. Kongguksu 콩국수: Kongguk is a chilled soy milk noodle soup. Traditionally, it's a refreshingly hearty bowl filled with wheat noodles, soy milk, cucumbers, and ground peanuts. There are variations of this dish. I have had it with watermelon, parboiled potatoes, pear, and various other ingredients. My favorite version can be found at Myeongdong Gyoja. Here the noodles are green because they are made from the super healthy chlorella algae and green tea. These noodles are full of protein and vitamins and have plenty of life in the thick soymilk broth. And, best of all, this dish is vegetarian friendly.
Myeongdong Gyoja: Myeongdong exit 5. Make a left at the first intersection (Woori Bank) and make the next right (Who.A.U. Clothing Store.)
www.mdkj.co.kr 776-5348 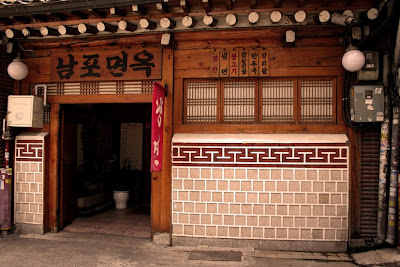 9. Naengmyeon 냉면: "Cold noodles" is not a concept that should alien to the Western mindset. I mean we have cold pasta salad and macaroni salad, but the idea of cold chicken noodle soup is enough to turn stomachs. This classic Korean dish is not just eaten in summer (it just tastes the best then.) What we have is a chewy buckwheat noodles that are in a chilled dongchimi (radish kimchi broth) and beef broth. It is topped with pear, an egg, and pickled vegetables. I recommend you work up a heavy sweat and then head over to Nampo Myeonok for a bowl. It's the definition of the word 개우하다 (kae-un hada: refreshing.)
Nampomyeonok: Eujiro exit 1. Make the first right and then head straight into the alley.
777-3131 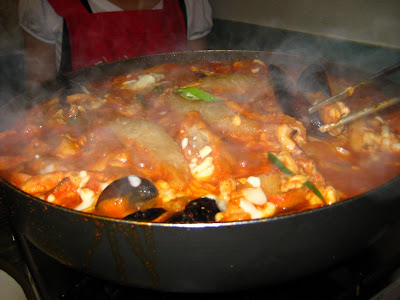 8. Dukbokki 떡복이 at 먹쉬돈나 (Mok Schwei Don Na): Sometimes you have to fight the heat with heat. Koreans have a very strange expression when they eat very hot food "Shiwonhada" it literally means "its cool!" They say this with zeal while eating really hot (temperature), hot (spicy) foods. In Samcheongdong, Mok Schwei Don Na is the king of dukbokki. And this little restaurant (whose name means "Eat, Relax, Pay, Go) always has a line of people waiting to get in to taste their famous sauce. Here you can pick from a list of 10 different ingredients such as dumplings, noodles, meat, seafood, cheese, etc to make your own D.I.Y. dish.
Mok Schwei Don Na: Anguk Station exit 1. Go straight and make a right at the Korean Travel Bureau Building and walk up along the stone wall. It is in the alley past Café Vangia.
723-8089 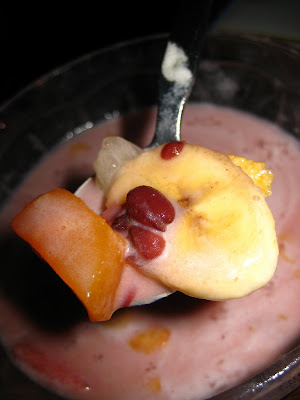 7. Patbingsu 팓빙수: There isn't a café or restaurant in Seoul that you can't find this crushed ice and red bean dish. It has evolved from the simple (crushed ice, sweetened red beans, roasted bean powder, and some rice cake) to its current iteration, a monstrosity of shaved ice, fruit (kiwi, strawberry, peaches, watermelon, and tomato), ice cream, corn flakes, sweetened condensed milk, chocolate syrup, whipped cream, and (the essential) candied rice cake (duk: 떡). The formula might change a bit, but it's like iced bibimbap. You take it all and mix it up. My favorite game is duk hunting. You get a couple of people together and fish around this delicious concoction to find the candied rice cake. The winner gets to bask in the envy of the other competitors.
All around Seoul. One of my favorites is in Samcheongdong at Ong Dal Saem (옹달샘). It's down Samcheongdong Street near the Blue House
733-3356 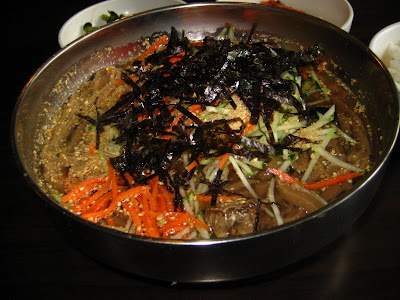 6. Acorn Guksu 도토리국수: This is a Korean delicacy that will rejuvenate your weary soul. Made from cultivated acorns that are ground into flour and then boiled. The noodles are slick and delicate to the palette. The broth is acidic and slightly spicy. And you'll find slivers of cucumber, carrots, dried seaweed, and crushed sesame seed swimming in broth. I recommend Woncho guksu (원조국수) in Jeongja. This is one of the best noodle houses in Korea and it has been around for close to 20 years. They close at 4:30, so you know they must be good.
Woncho Guksu: Jeongja Station Exit 3. Go down the alley next to Nolbu budae chiggae.
711-5973 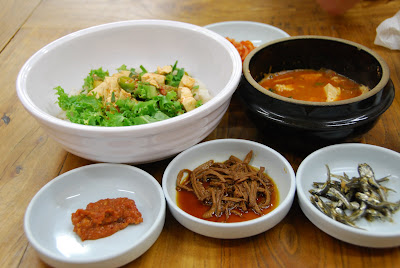 5. Taengjang bibimbap 된장비빔밥: Yes, I miss big bowls of salad during the summer. Mainly because during the summer, the idea of a big greasy burger and fries weighs on my mind like the thought of having to carry a refrigerator up a flight of stairs. Taengjang bibimbap is the Korean big salad that comes loaded with fresh greens and leaves. And instead of some oily, mayonnaise based dressing; it comes with tangy, taengjang soup to mix in your salad and rice. My favorite is in Insadong at Tweit Malung (툇마릉). This dish is vegetarian friendly.
Tweit Malung: Go down Insadong Street and make a left at Dukwon Gallery at Hwaenamu-gil. Make the first left into the alley and it is in the basement and 2nd floor of the building next to a restaurant named Doo-rei. 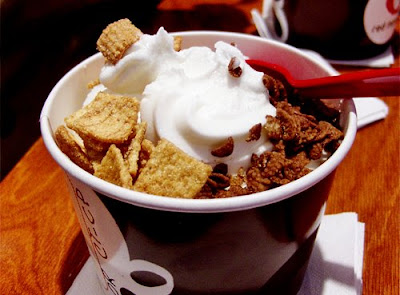 4. Red Mango: Before Pinkberry there was, and still is, Red Mango. I have gone to Red Mango for years and have always been in love with the citrusy, clean, and silky yogurt. I've tried Pinkberry and it seems like the younger upstart; it doesn't have the refined maturity of its senior. You can find them dotted all around the city and it's upscale interior is a great place to chill and enjoy a bowl of frozen dessert topped with your choice of fixings.
http://redmango.co.kr/ 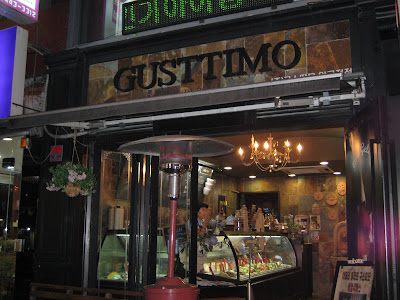 3. Gusttimo 구스띠모: This is the gelato store that started the rage in Korea. Many have tried to copy; none have come close. The story goes that the owner studied for years in Italy to learn the craft, perfected it and brought it home to Korea. It is some of best gelato outside of Italy, and I'm sure it ranks near some of the top there. They have regular gelato mainstays like Frutti Di Bosco, Cioccolato, and Fragola. But Gusttimo has a quirky edge with such flavors as Riso Nero (black rice), Marron Glace (Chestnut), Formaggio (Cream Cheese), and Cereali (Cereal & Chocolate).
All around Seoul. Their flagship store can be found in Apgujeong, next to the Rodeo Street Gate across from the Galleria. It is to the side of Paris Croissant.
www.gusttimos.com 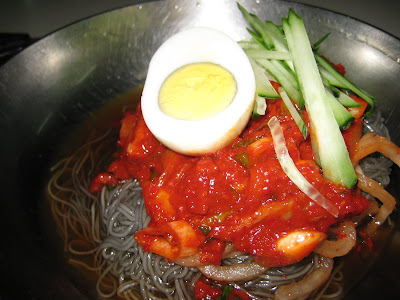 2. Bibimguksu at Ojangdong Hwung-namjip 비빔국수 at 오장동흥남집: It's all about the noodles and you can't get better or fresher noodles. As you eat, you can look into the kitchen and see the chefs making the noodles on site. One man is back stepping on the buckwheat to soften them up awhile another cuts them. There is a third person back there and I figure he must be laying on the magic because the noodles that I slurped were like gossamer threads. Eating the whole bowl was as if I was taking a breath of cool mountain air after reaching the apex. Yeah, it's a bit spicy, but that's what makes it enlightening.
Go to Eujiro 4-ga exit 8 and to straight. At Chunggujeong Intersection (중구청), make a left. Go around the Market entrance and it is opposite Suhyup Bank (수협 은행)
2272-7117 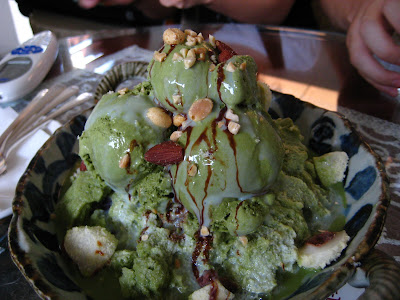 1. Patbingsu at Café de Coin: Luxury Patbingsu has become a fad in Seoul the last couple of years. The trend seems to be to take an exceedingly expensive space and fill it with fancy décor and then charge 8,000 won for a coffee and 20,000 won for a patbingsu. You would think for this price, you would be getting something gourmet, something worthy of chefs trained at Le Cordon Bleu. Most of the time it's not the case. I was equally reluctant when I went into Café de Coin, but it came recommened. Café de Coin is impressive. The interior is modern and sleek. My friends and I were escorted up a private room on the top floor and we were amazed by the spectacular view of Seoul. Here the patbingsu is more like a sophisticated ice cream sundae. The green tea bingsu had almonds, distinctly flavored green tea ice cream, and red beans. The ice was shaved snowflake fine so it blended well with the ice cream. The black bean bingsu was a real surprise. Finely shaved coffee flavored ice is topped with black sesame ice cream and sugared pecans, cashews, and almonds. The bowls were licked clean and we contemplated asking them to make us a banana split bingsu. Locations around Seoul.