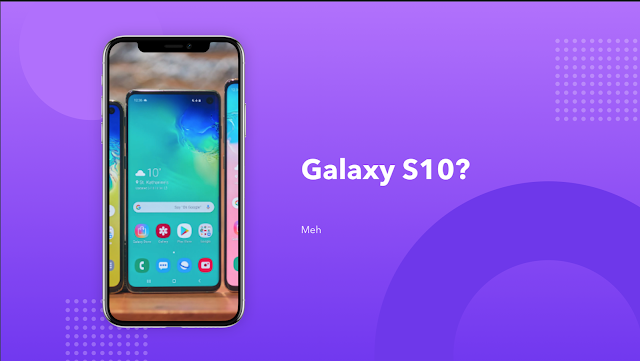 Meh. I think Samsung is trying to sell this phone as a laptop & camera replacement. It's supposed to be the phone for all seasons. It also seems targeted at non-tech people and SNS media people that dream of being an Instagram star. It's too big. And it is blingy but it's not blingy enough to really impress anyone. Ultrasonic fingertip sensor? It just sounds like a lot of stuff that will break in time. It's not a groundbreaking phone. It's like the Samsung phones of old. The old flip phones that had it all but did nothing well.

Plus, it's still not as fast as the iPhone even with the new processor and extra ram. And the fold? Who needs it and who will use it? It's just a novelty like the flip and turn screens. Also, the first person to sit on it and break it will start a firestorm of ridicule. Lol.

I think phones have come full circle. I've had them all and the most important thing for a phone is security, privacy and navigation. Apple and iOS gives that to me. Android feels so spammy with constant apps popping up if you don't pay for upgrade. For example, imagine you are at a funeral and a loud ad for candy crush starts to play. You will come to resent and distrust your phone. And you'll think, is the phone mine or does it belong to Google and app developers? Android software is a mess.

To be honest, I want to downgrade and get a smaller iPhone like an SE. Apple should update the SE. It was the perfect size and when I am chasing after my kids, it's not a giant anchor in my pocket (like the 6s+).

Also, I have an iPad 2018 and damn, the processor on that can handle nearly everything and it is a 2 year old processor plus the battery lasts all day. The iPad has become my idea book and an editing tool that makes me excited to learn about technology again. It is also the perfect 2nd monitor when I am on the move.

The phone had many promises but too many limitations and now I just want it to return to being a phone. Ideally, I want my phone to be a communications device and a backup camera. Plus, I am going back to old technology - especially those from the Steve Jobs era. I have more faith in it. I am using my 7 year old ipod nano again because it still works perfectly and does the 1 thing it is supposed to do and it does it well. The battery also lasts days (since I don't play it non-stop)

My one complaint is that I do wish that Apple would open up the versatility of their ports and add an SD slot. I hate carrying dongles and I need to be able to use an external hard drive to import and create content.
#blog phones samsung Technology