The Girl With the Green Tea Hotteok 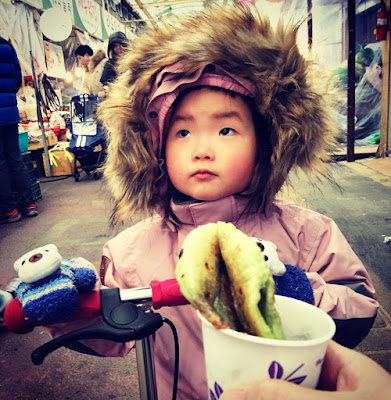 Hotteok in Winter. Here is Hazell dressed for winter on her kickboard. To keep her warm, I bought her a hotteok: A Korean Sweet Cinnamon, Nut Caramel Donut. She didn't care so much for the donut but she does look good in her winter clothes. You can find them in the traditional markets. This one is at Gwangmyeong Sagaree Station. If you wanted some more information on this iconic dish read further below.

One dish that I believe is universally adored in Korea is hotteok. Hotteok is a leavened dough cake that is stuffed with cinnamon, sugar and nuts. Them the dough is flattened and fried. Through the frying process the sugar melts to create a delicious caramel filling. According to some accounts from food historians, this snack was brought to Korea by Chinese immigrants who first landed in Incheon's international port. And even though the snack and the name resembles western "hot cake," hotteok's etymology is Chinese/Korean. "Ho" comes from the Chinese for barbarian and "tteok" is Korean for rice cake. The original version of this dish had meat inside like the Mongolian Khuushuur but it later evolved to a sweet snack.

These days there are many different versions of hotteok all over Korea from sweet to savory. You will find versions of this snack on the streets, convenience stores, cafes and even in fine dining establishments. Typically this was exclusively a wintertime snack but these days you can find them year round. However, I recommend that you find a busy hotteok stall in January and wait in line for 20 minutes as your fingertips and face freeze. The first bite of this crisp and chewy, "caramelley" snack is like a shot of adrenaline. These days there are many versions of this snack including exotic fillings such as kimchi and pork, sweet potato noodles and veggies, red bean, and even various nuts and seeds. There are differing methods of cooking it as well. Some like to have it deep fried, there are some that make it crispy on a hot pan and finally others that like to just add a little bit of oil and cook it on a hot surface. Whatever way you like it, you'll be sure to get a great snack.