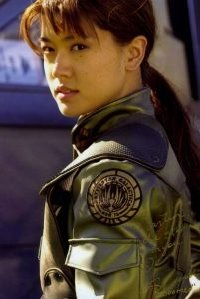 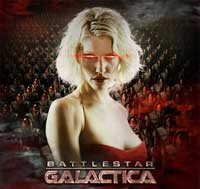 Oh my gosh, the Pegasus becomes a kamikaze weapon to destroy the Cylon's battleship. Starbuck kills her Cylon captor and the father of her daughter in front of her daughter. New Caprica is evacuated by Adama. Sharon and Agathon's half cylon, half human baby is recovered by Lucy Lawless and Starbuck finds out her daughter is not really her daughter but someone elses.

Captain Adama: "I guess you didn't understand my orders."
Apollo: "I could never read your hand writing."

SO...I was wrong. I thought that the series was going the wrong direction. My favorite character Starbuck was playing mother in a holding cell, Apollo gained a ton of weight, Adama had a mustache, Gaeta was the pencil pusher for Baltar and the damn Cylons were in charge!
Also, Saul- whom I never really liked, lost his eye and was leading the Earth's resistance in a very irrational non-Adama way. There seemed to be no nobility, no justice, in his actions and all of this added to make the show a downer. It's like reading Elsie?? Weisel's Night. You know you should finish it, but you know you're going to need a couple of xanax afterwards.

Oh, by the by, what happened to this week's episode of The Office and My Name is Earl?

And I don't buy this whole NBC is the losing network. I think that NBC is pulling in viewers off the Web. They seem to be the first to make this transition and I think it's the right direction. I'll be looking into acquiring some shares of NBC/Disney.
Email Post
Labels: TV