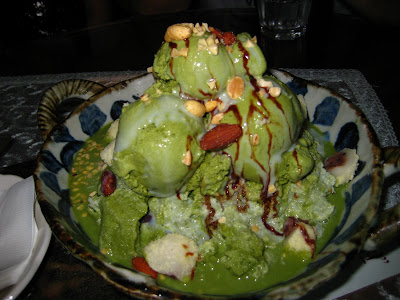 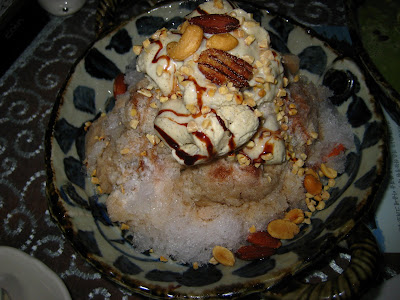 The pretty little coffee house 'Coin' wasn't the place we were looking for.

It was too modern and western while we're looking for traditional Korean patbingsu(sherbet ice with red bean). Anyway we gave it a try since we were tired of walking down the narrow Samchungdong street because of the steamy hot weather.
The first floor and second floor were just a very plain coffee house but surprisingly there was an attic, where we were told to go.

Climbing up the steep staircase, you can find a cozy attic with only one table for four people.
There was a roof garden outside of the attic and the view from the garden was fantastic.
We ordered Green tea Patbingsu and Black bean Patbingsu for 4 people because we're told that one patbingsu was only enough for two people.

Actually I think four people can share one patbinsu since it's quite big portion of it.
Green tea patbingsu was refreshing from green tea ice cream and not too sweet and it came with nuts, while Black bean patbingsu had slightly bitter sweet.

We were wondering if the black bean was coffee bean, because we tasted coffee in black bean patbingsu. Both patbingsu are more like Icec ream bingsu, so if you don't like lots of ice it would be the best choice.

You can get to Samcheongdong by going out Anguk station exit 1 and making a right the Korean Travel Bureau building and walk up along the stone wall.