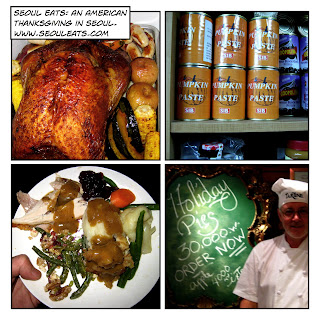 Thanksgiving for Americans will be on November 27th this year and there are several options for you to get your turkey fix.

1. DIY: Do It Yourself
If you want to cook your own turkey then there are several options for you. Costco has 7.7 kilo turkeys for sale for W80,000. I’m sure you can get the rest of the fixings there too. If you lack a membership card then I recommend going to www.ezshopkorea.com. They will deliver to your home. The Hannam Mart and Haddon House also have turkeys and fixings for sale around this time. They have a range of sizes of turkeys. Hannam Mart 702-3313. Haddon House 794-0511.

2. Go Out To Eat.
Most international hotels and western restaurants in the Itaewon area will have turkey dinners available. Some are buffet style while others are sit down, coursed meals. The best is Toque near Hangangin Station. Chef Meili’s in Itaewon also has a nice spread and you can’t go wrong with the Grand InterContinental Hotel in Samsung-dong. Prices range from 40-60,000 per person. Dinner Service times vary. Reservations are highly recommended. Toque 794-3834. Chef Meili 794-7024. Grand InterContinental Hotel 559-7631. 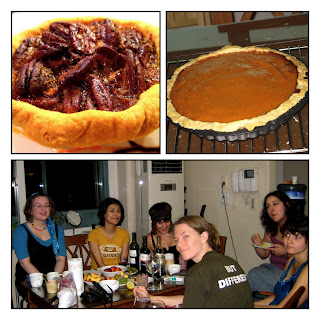 3. Take Out
Call the Delibonbons at the Coex InterContinental. They have 6kg (160,000 + VAT) and 8k (180,000 + VAT) turkeys for take out from November 15 through December 31st. The turkey comes with roasted and steamed vegetables, cranberry sauce, stuffing, and giblet gravy. 3430-8660. The other option is to make friends with the military. The Dragon Hill Lodge on the Yongsan Military base has fully cooked meals in the Itaewon area for military personnel (and friends.) Last year the prices ranged from 90-95,000 won and it is enough to feed 8 with leftovers.

4. Get a Pie
Chef Garrett from Tartine in Itaewon is making homemade pumpkin pies at his dessert cafe, Tartine, in Itaewon. This dessert cafe has been making waves since it has opened and it has alot to do with the chef's meticulous attention to detail. All of his tarts and desserts use high quality fresh ingredients and the crust...THE CRUST! The crust is crunchy and fork snappy- just as crust should be. This Thanksgiving season he will be making pumpkin pies to order. They will cost 30,000 a pie. If you are going to a Thanksgiving celebration, this would be the "it" item to take. Also, if you're homesick and you need a reminder of home I'm sure this pie will take you back.

Directions: From the Hamilton Hotel, go right –towards Paris Baguette, or go straight from Itaewon Station Exit #1, past KFC [first alley] to the second alley, turn right. We are halfway up the alley on the right [look for the pies in the window].