Shikgaek: The Gourmet Korean TV show was a comic first 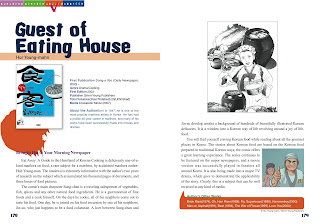 Here is some information on the Manhwa on Shikgaek. This is the comic that inspired the movie and the drama. By the way the drama will be out on DVD on November 11th! I am so excited. I was so sad when mysoju.com stopped updating the episodes. Now I'll be able to watch all of the episodes!

Here is the information on the Manhwa:

About the Author Hur Young-mahn
Born in 1947, he is one of the
most popular manhwa artists in Korea. He has had
a prolific 40-year career in manhwa, and many of his
works have been successfully made into movies and
dramas.

Brought Hot to Your Morning Newspaper

Eat Away: A Guide to the Heartland of Korean Cooking is deliciously one-of-a-
kind manhwa on food, a rare subject for a manhwa, by acclaimed manhwa author:
Huh Young-man. The manhwa is extremely informative with the author’s two years
of research on the subject which accumulated ten thousand pages of documents, and
three boxes of food pictures.

The comic’s main character Sung-chan is a traveling salesperson of vegetables,
fish, spices and any other natural food ingredients. He is a gastronomist of fine
foods and a cook himself. On the days he cooks, all of his neighbors come out to
taste his food. One day, he is joined on his food excursion by one of his neighbors,
Jin-su- who just happens to be a food columnist. A love between Sung-chan and Jin-su develop amidst a background of hundreds of beautifully illustrated Korean
delicacies. It is a window into a Korean way of life revolving around a joy of life,
food.

You will find yourself craving Korean food while reading about all the gourmet
places in Korea. The stories about Korean food are based on the Korean food prepared in traditional Korean ways; the comic offers a great learning experience. The series continues to
be featured on the major newspapers, and a movie version was successfully played in theaters all
around Korea. It is also being made into a major TV drama, which goes to demonstrate the applicability of the story. Clearly, this is a subject that can be well received in any kind of media.

***This is a page out of an early draft of Manhwa 100, a book that I worked on. I would say go out and find the book, but only 2000 copies were made and they aren't readily available.***
comic gourmet korea shikgaek