Meet up- TBS efm and Seouleats 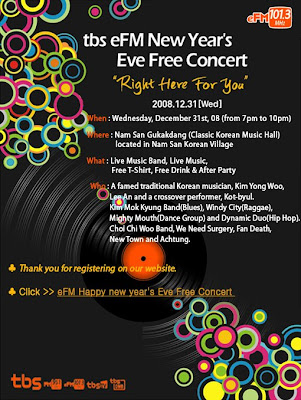 I would like to invite you to a New Year's Eve event that TBS efm is hosting. The radio station is hosting a party that is open to all- especially foreigners in the city. It is going to on Wednesday, December 31 from 7-10pm-so it would be a great place to pregame before heading out to another New Year's Day party. It is going to be held at Nam San Gukakdang (Classic Korean Music Hall) in Nam San Korean village. Directions are below.

They will have live music, free T-shirts, and lots of free beer. Yes, you heard me correctly: free beer. And they will be giving away 10 iPods! I think they'll be giving other things away too. There is going to be an after party and lots of cool bands.

The registration period is over, but I have been given a bunch of free invites so if you let me know that you would like to come, then e-mail me so I can add you to the list.