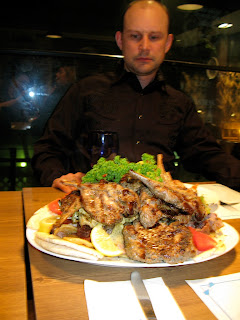 So, I'm a weekly guest on The Steve Hatherly Show on TBSeFM radio and my corner is all about food. I'm on every Saturday at 4:30pm on 101.3efm.

Now Steve is a big kid and there are certain things that he just doesn't like talking about. First of all, he doesn't like desserts and he doesn't like vegetables. Last week I brought up vegetarian food and food for hot weather and he just whined through the whole segment. He whined just like he did here:


Honestly, I think his 4 main food groups are Cigarettes, Meat, Alcohol, and Whine.

So this week, I've decided to give him what he wants and I'm listing all the places where you can get lots of protein.

1. Santorini in Itaewon. You can get a whole pile of meat for like 60,000 and it's enough to feed 4 people. You get lamb, chicken, pork, and other mystery tidbits that are all chargrilled and sprinkled with oregano. The Greeks were manly people. They were so manly in fact that they could have manly boyfriends and no one could say anything about it (because they would just conquer them.) Behind Hamilton Hotel, Itaewon Exit 1. 02.790.3474.

2. La Plancha in Itaewon. They do a similar deal as Santorini. You gotta get the couple sets (or third wheel sets) because you get surf and turf and sides. The couple set for 2 is cooked for a chunky couple if you know what I mean. Great food in a blood red atmosphere that just makes you crave more meat.

3. Don Valley in Itaewon. Go out exit 3 and it's below the Quiznos and Coffee Bean. Their Beef ribs are awesome because you just get a hunk of American Beef that's been marinated in deliciousness. The sides are weigukin favorites such as spinach and macaroni salad. Their marinated pork is nice as well. It's open 24 hours so if you wake up in the middle of the night and feel like killing a cow or pig, it's open. And for the ladies, they've got ice cream and wine.

4. RIB's in Hongdae. Nothing is manly than chewing on the bones of a dead pig. If you want to be super manly, you can break the bones in half and suck out the marrow. It's like Lord of the Flies shit. Oh, wait, I just got another symbolic reference. The kid was named Piggy because he was a wuss and all wusses just need to be killed. (hmmm...talking about meat is making me all aggressive and stuff...oh, I just had a funny thought. In a new movie version of Lord of the Flies, the part of piggy would be played by Roboseyo.) They've got black pepper ribs and spicy ribs and awesome side dishes. It's out exit 4 in Hongdae. 02-325-3579.

5. Hongik Sootbul Kalbi, near Hongik University. Also, up around exit 4 of Hongdae is one of the busiest and best galbi restaurants in the city. The high quality meat is the main draw and is always a line of people waiting for a seat. Sure you might have fancy suited ma'ams and sirs, but when they leave they smell like everyone else: greasy. The place is fast and service frantic. 02-322-4487.

6. Mercado :Brazilian BBQ. This one is from Ben from the Daily Update (also on TBS). It's opposite cinecity in sinsadong. Meat needs to be piked and put over fire and that's how the Brazilians like to roll. Ben says that they serve steaks to order so if you want a bloody steak, this is the place to go. He recommended the Picanha steak. Picanha is the Rump Sirloin steak that's staked on a pike (yeah, cheesy word play...so what!)

7. Ipanema. Over by City Hall this is another Brazilian Churrascaria. I've been here a couple of times and I'm a fan of the meat, but the place is a bit too posh to contain my manliness. It needs a couple Harley Davidson's and a Beer Pong table. The meat is plentiful and there is a salad bar for the ladies. The men are expected to drink beer and eat a whole cow. Ipanema is located on a scenic road behind the Doksu palace, close to the City Hall train station.$$ (27-11, Chong-dong Chung-gu) 02-779-2756

7. For those that can't handle the beef and pork there is always Dokdo Chamchi (독도참치). You know Tuna just doesn't taste as good if you don't have a dash of politics thrown in there. DOKDO BELONGS TO KOREA! Locations are around the city and they have all you can eat Tuna. You can sit around and have the chef slice red, red tuna for you while you drink beer, smoke a fag, and hate on the Japanese.
Food korea lists meat Seoul Eats steve hatherly tbsefm