From the Korea Times: Restaurants will be fined for reserving their side dishes 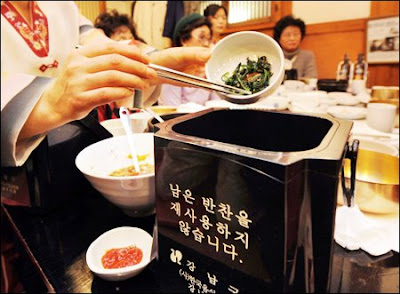 It's an unspoken fact but many restaurants will reuse their side dishes. Not all the restaurants, but I'm talking about some of the smaller local places. Starting today, if they are caught, they will be fined.

Reuse of Side Dishes Subject to Sanctions From Today

Lee Sun-young, a 26-year-old office worker, rarely eats side dishes at small restaurants or bars. That's because she knows how some restaurant owners ``recycle'' them.

``I once worked part time at a local bar and was shocked that the owner mixed leftover food and served them to other customers. It was so disgusting,'' Lee said. ``After watching that, I couldn't eat side dishes at restaurants, especially small ones. It was more surprising that the restaurant owner didn't feel a sense of guilt.''

From Friday, restaurants reserving leftovers to customers will be suspended from business or slapped with fines of up to 30 million won.

Recycling of leftover food is not only unsanitary but the key cause of food poisoning, especially in summer, experts say.

``Customers' saliva is transferred to leftover foods and it could cause food poisoning,'' Lee Kuem-Ju of Kyung Hee East-West Neo Medical Center.

The Ministry for Health, Welfare and Family Affairs announced new regulations for the reuse of food at restaurants. According to the new rule, eateries can only recycle certain food supplies that maintain their original form and are not processed such as lettuce, sesame leafs and cherry tomatoes; ingredients with an outer cover intact such as bananas and quail eggs; and those customers can take out from a lidded container if they so desire including kimchi and pepper powder.

If caught reusing food other than those listed, the dining place will be temporarily closed down for 15 days. Any restaurant caught again within a year will have their operating license suspended for two months, and three months for a third time. If they persist after this, eateries will lose their license.

Seoul City plans to promote the new regulations before launching on-site inspections. The city has already looked into food reuse at 92 local restaurants and caught five of them doing so.

``Most of the eateries caught were small ones reusing rice, side dishes or pot stew, while larger restaurants were more hygienic, and managed food leftovers better,'' an official of the city's Food Safety Division said. ``We will publicize the new rule sufficiently before we begin inspections, giving small restaurants enough time to correct their wrongdoings on their own.''

District offices in Seoul have been pushing restaurants to either not recycle side dishes, or to charge for them so guests can order the amount they want. However, owners emphasize that the most important thing is to change the mindset.
``Recycling leftover food can actually save a lot. Though I don't do it, there are still many places reusing side dishes,'' a small restaurant owner in central Seoul said. ``If the owners do not change their way of thinking, the new rules will end up as empty talk.''