Roast Duck, Garlic Donuts, and patbingsu with a Hummingbird

October 13, 2009
Last week I had a chance to meet up with Jenny and Steve who were in town to visit family and to find some good Seoul Eats. Jenny is the writer of the blog www.hummingbirdappetite.blogspot.com She takes amazing pictures and I love her food sensibility. Apparently, she's also a very diligent blogger because she already has the posts up about these restaurants. Hmmmm....so you should visit her blog so you can see a different perspective on the same meal. I decided to take them to a restaurant that I had not been before, but I had heard a lot about from my fellow bloggers in arms: Fatmanseoul and Paul Ajossi. We met up at the Ginko Tree House in Hannam for some stuffed roasted duck. You can read Paul's review of the restaurant here. 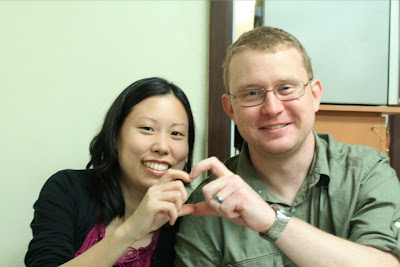 Here is Jenny with her husband Matt. 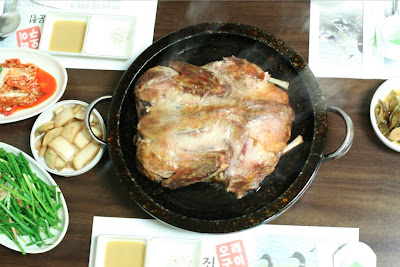 The duck arrived at the table after being cooked for three hours. The pan was smoking hot and sizzled for a good 20 minutes after arriving. 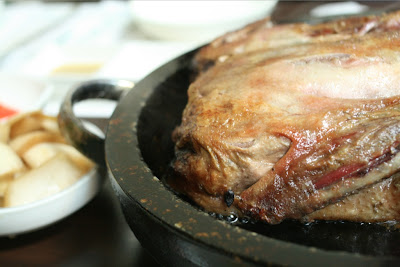 The skin was perfect. It was as crisp as a Beijing style duck but with a bit more moistness and flavor. 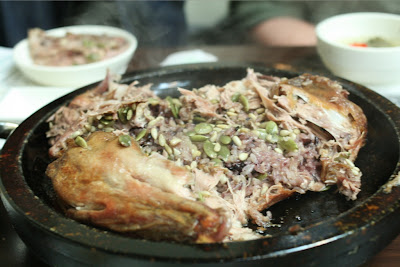 When you opened up the duck, you found it stuffed with red rice, pumpkin seeds, pine nuts, and many other delicious things. Korean stuffing is so much better than Stove Top. 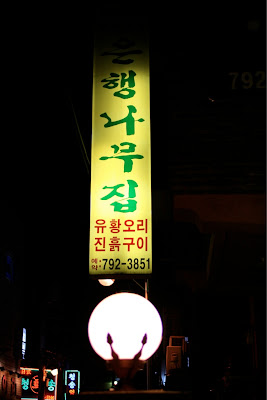 Here is the outside sign. The meal was absolutely divine- especially the crisp skin that was on the bottom of the duck. It was so savory and rich and crisp and full of duck-fat-goodness that it was like eating a Dorito for the first time. You know what I mean. The first Dorito you ever eat is the best one because it is unlike any other snack. However, I would go back for this skin whereas I've tired of Doritos. 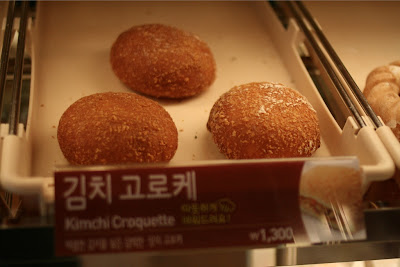 We felt a bit adventurous so we went to Dunkin Donuts and found the Kimchi Croquettes and other strange abominations (vitamin donuts, healthy donuts, etc.) that Dunkin Donuts has been doing. 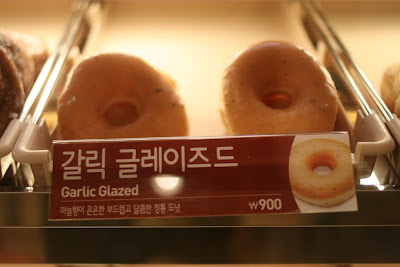 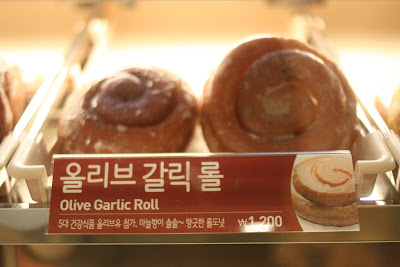 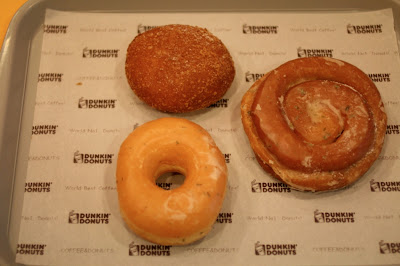 Here is the unholy trinity. The kimchi croquette was more bread than croquette and it tasted the best out of the three. That's not saying much; it was still pretty gross and it didn't really taste like kimchi. The garlic glazed tasted like sweet garlic bread and it left a nasty aftertaste and the olive garlic roll tasted the same way. I don't recommend it unless you are planning on playing a trick on someone. I would recommend you get a box of donuts and sneak one of these in there and laugh at the person who picks it. 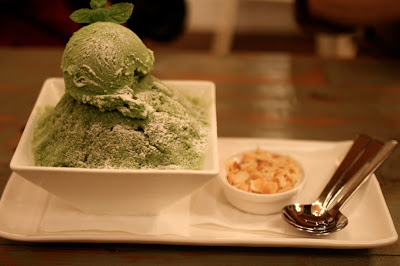 To finish off the evening, we went for some green tea patbingsu over at Neal's Yard in Itaewon. 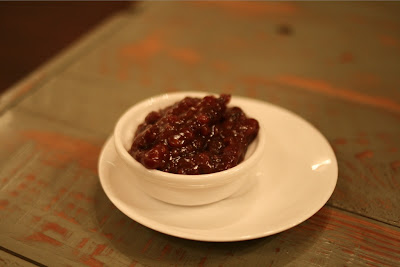 Jenny was a fan of the red bean so got a little extra.

The Hummingbird lives up to her reputation because she finished off most of the patbingsu while Steve and I simply sat back and talked. It was a really fun evening and I would recommend 2 out of the 3. (DON'T DO THE DONUTS!)

Oh, and one more thing...Fatmanseoul did a more extensive review on the donuts. You can read about it here.