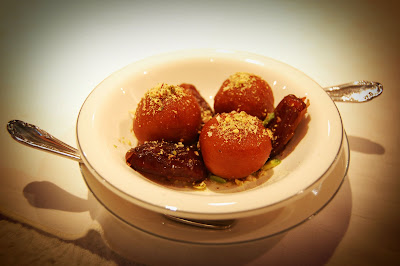 In depth with Munir Rana: Owner of Alsaba Restaurant and Saba carpet store
Written and Photographed by Chalica Pack
www.vegetarianinkorea.com

One cold night last March my friends and I ended up dining at Alsaba. It wasnt planned, we had tried to find Petra, but since I was new to Seoul, and clearly directionally challenged, we got too cold wandering around and decided to try the Indian/Pakistani place with the big green sign. We were blown away by the food. 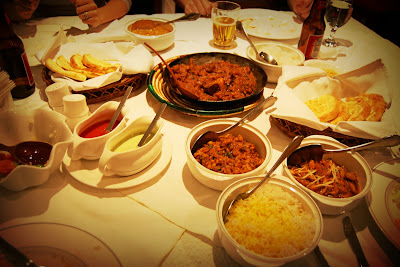 The food at Alsaba is fantastic. The chana dal is my favorite vegetarian dish, but everything I have eaten there is great. As I have mentioned in past reviews, ambiance is everything to me. The decor (Which I found out later that the owner,  Munir Rana, picked out himself.) is filled with elements of beauty from around the world. Having studied the history and cultures, Munir wanted his restaurant to show how different civilizations have blended together. Fabrics in his dining room might hail from Pakistan, while other items of décor are reminiscent of Italy.

Munir's blending of cultures as spills into his kitchen. While his food is Pakistani, Munir has some fusion dishes on his menu to appease a Korean palette new to Indian food. There is a shrimp multani (instead of chicken) and a curry dish with Korean tofu.

One thing Munir is not changing about his restaurant is its dedication to Halal cooking. Muslim customers can be assured they will be in keeping with their religion while dining at Alsaba. Munir says, “ food business is close to religion”. Both must start out with a clean heart. Munir respects my vegetarian diet and said his food is prepared for each customer's dietary needs. It's comforting to know that there is no sneaky use of beef or chicken broth.

I've since run into Alsaba owner Munir Rana on several occasions. He's often seen on Yongsan Military Base selling his rugs at various vendor events.  Munir also owns the restaurant and the adjacent Persian rug store- Saba. Recently, I had an opportunity to sit with Munir for a late dinner. 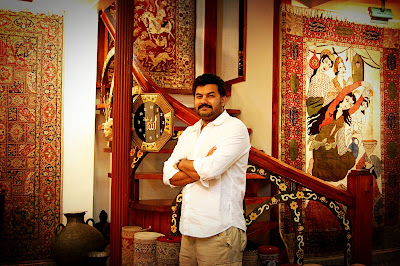 Munir has been in Korea for about 25 years. His family started the rug store in 1990 and the restaurant in 2000. Just as Munir does, his kitchen staff hails from Pakistan.

After a great meal, Munir took me next door to his rug shop. I've been a lifelong fan of Persian rugs, but with two little ones at home-I told Munir it wasnt likely I would be purchasing such an “extravagance” at this point in my life. Munir is too much of a gentleman to roll his eyes at me, but he did tell me that having children at home is not a reason to delay purchasing a Persian rug. Persian rugs are staple items in homes in Pakistan, India and Iran- all countries Munir has rug dealings with. These are family rugs. They are meant to be lived on.

Munir buys his rugs from small family dealers. They come directly from the weavers who made them. 99% of the rugs he sells are made of vegetable dye and not harsh chemicals like some other Persian rugs. Munir is a true pioneer in Korea for selling handmade Persian rugs.

Munir's rug store is not a business to him- it is a hobby. He talks about these rugs with such respect for the workmanship it took to make them. He clearly feels Persian rugs are a founding element of his heritage.

Munir dreams of opening a multi-cultural restaurant on the Yongsan Post. As the wife of service-member, I would LOVE to see Rana's dream come to fruition.


DIRECTIONS: Alsaba is located at the Noksapyeong end of Itaewon.