Food for Thought: Should you really be eating Ramen? by Lindsey Huster 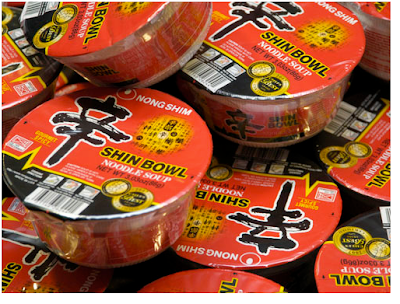 Ramen (라면)  is a fast food of South Korea, perhaps the fastest food that a Korean can consume.  Within seconds of purchasing your favorite cupped-variety, Ramen can be prepared and slurped by puckered lips and deft chopsticks.  Hoards of young and aged  Koreans can be found polishing off these timely treats as an afternoon snack or overdue dinner.  Ramien qualifies as the epitome of convenient.


There is no such thing as a free lunch, however, and if it is under 1,000 won, it definitely  pays to be wary.
Momofuku Ando, the creator of Nissin Foods, hatched the idea in 1958. Twenty years later, Nissan introduced the Cup Noodles. Japan later introduced South Korea to instant ramen in the 1960s. Ramen found instant success with its minimal preparation and cheap price. Even now, ramen is hailed as the greatest Japanese creation of the 20th century (beating karaoke and headphones by a landslide). Ramen continues to find its way into the mouths of 98 billion people each year, with South Korea consuming the most out of every country.


Unlike American Ramen, which tends to be savory, Korean Ramen noodles are on the spicy side and seasoned with chili peppers.  Adjacent to the standard beef-flavored ramen,  also stand other indigenous takes on this instant classic, such as shiitake, seafood, kimchi and cheese.
As with most fast foods, however, stands the question of health. Amidst a culture of fresh vegetables and rice dishes, ramen pales in nutritional value.

Consider the noodles. They are extremely high in carbohydrates and are usually deep fried. Of the two main components of Ramen, however, the seasoning packets pack a far worse health punch.  These packets include excessive amount of sodium.  An average packet of Nong Shim, a leading manufacturer of Ramen,  contains 1050 milligrams of sodium, which is almost half of your total intake for a day. The seasoning packets are also problematic with its liberal use of MSG. Monosodium glutamate is a food additive that is often found in some Asian food.  Although MSG is a cheap and an effective way to create the taste of meaty and savory flavorings, some studies have found some unsavory side effects  of MSG. The side effect list is long: starting with minor complications like nausea, rapid heartbeat, drowsiness, the symptoms quickens to extreme, including seizures and paralysis.


With almost-as-convenient Korean foods such as kimbap and bipbimbap, healthier (perhaps not nearly as quick) food options exist in Seoul. If you prefer eat your meals in seconds rather than minutes, however, opt to use only half of the ramen seasoning packet.  Using half of the flavor will cut half of the sodium intake as well as the MSG.  Another option is to seek out ramen that is MSG free, or contains healthier ingredients. Nong shim has several that are MSG-free and contains unfried noodles, which have 25 percent less calories than the original variety. Samyang also released MSG-free ramen, although the instant noodles remain fried to saturated fat perfection.

Lindsey Huster a writer who usually hails from Chicago. She enjoys listening to music,wearing cardigans and generally anything vegetarian.