Foods to Avoid Feeding Your Dog 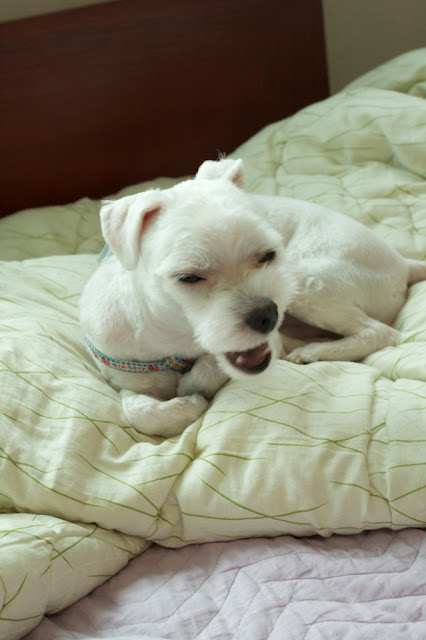 I think you are all familiar with my dog: Hubble. Recently he went to stay at my friend Richard's house in the country (Bundang) and when he came back, he became accustomed to a whole new standard of living. I've been cooking for him these days. I usually make a scrambled egg for him in the morning and I'll share some of my dinner with him. I feel that eating this way- at regular times, is good for our relationship and for both of our healths. In the last year, I've gained quite a bit of weight: ten pounds. I guess in the line of work that I do, it is understandable; however, this is unacceptable to me. I've been on a diet since last Sunday and I've been sticking to it. These days, I eat very little rice (I've had one bowl in the last week). I eat more soups, stews, and vegetables. Also, I'm following Michael Pollan's advice to eating: "If you are not hungry enough to eat an apple, then you are not hungry."

I've lost a pound in the last week, so I feel like this is working.

Oh, back to cooking for my dog. I've been doing research on which foods you shouldn't feel your dog. I already knew about chocolate, but I didn't know why it was bad. Apparently chocolate, coffee, and tea have caffeine, theobromine, or theophylline which is toxic and can affect the heart and nervous systems.

Surprisingly, I found that raw eggs can lead to skin and hair coat problems. I mean I knew that raw eggs are bad because they have salmonella, but I didn't know about the hair and skin problems.

Yeast dough is bad because it can expand and produce gas in their stomach.

And (this is something I'm guilty of) fat trimmings can cause pancreatitis which will damage the dog's ability to digest food.

And one of the most dangerous foods for dogs is Xylitol which is an artificial sweetener that is also found in Xylitol gum. This can cause liver failure.

Here is a link with a more complete list.