April 12, 2011
Written and Photographed by Aaron JacksonCrabb
“Hello, how are you today?” came the soft warm voice of the proprietor as she walked up from behind. “I am well, thank you,” I replied glancing over my shoulder to see who was speaking to me. “How are you?” I inquired as she moved around me taking up her position behind the counter while opening a menu book and placing it before me. “Do you know Dutch Coffee?” She asked. “Unfortunately, no. I do not.”

“Well than, let me introduce you to Dutch Coffee. My name is Euli. My friend Luni and I opened this café just two weeks ago,” she began to explain, “Dutch Coffee takes a very long time to brew. It is a specialty coffee. You see the shelf in the corner over there,” pointing towards the corner where a three columned shelf sat on top of a mechanics red tool box with a bunch of glass chemist beakers, “that is our brewing equipment. When we pour water into the top dripper it slowly drips a single droplet of water out landing on top of the paper filter resting on the top of the coffee grounds. Eventually, it seeps through the coffee grounds until it reaches the vertical nip dropping down into the three-inch spiral cylinder. Then it slowly trickles along with gravity until reaching the spout where it drops down into the 2000ml beaker. It takes sixteen hours to complete the process,” she explained smiling.

Taking a small glass cup off the rack she inspects the inside and out then sets it on the edge of the sink with other dirty dishes. Her brow furrows as she chooses another cup then with a tea towel polishes a tiny spot on the edge. Stepping beside me she pulls open a glass door reaching inside the six-foot refrigerator pulling out a square bottle with a deep dark brown liquid. Popping, back the flip top she slowly pours a three-quarter full sample of the dark nectar. Sliding the glass over she doesn’t say a word. Thanking her, I brought the cup to my nostrils pulling in a long deep breath. Inhaling the scents of caramel and cinnamon. Smiling I took a sip then another. Letting the liquid slide across my taste buds before swallowing. On my third sip the liquid has changed in its intensity allowing the subtle hints of caramel and nutmeg linger. “What do you think?” Euli inquires. 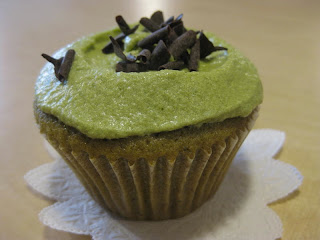 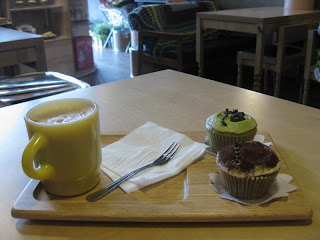 “It’s like a fine wine. I am surprised by the taste. It’s amazing the contrast between what I know about coffee and the essence of this vibrant bittersweet taste.” She smiles, then hands me a chocolate truffle, “take a bite of the truffle, then a small sip of the coffee. Let the two sit on your tongue before chewing the truffle.” I do as instructed, biting into the dark chocolate truffle, holding it to the inside of my cheek and pulling a small sip. Letting the two meld together inside my mouth an intense sensation unfolds as a gigantic grin purses my lips. I cannot believe the powerfulness of the flavors hidden deep beneath the layers of the coffee bean. “This type of coffee is best consumed within three months of it being brewed. This bottle you are sampling from was brewed on February 6th about a month ago. Do you like?” she asks in a subtle tone.

Like? Wow! Like is not even a word I would comprehend to use in describing this unique creation. This is far beyond like… “This is extraordinarily delicious times a hundred,” I reply smiling as I pull another small sip into my mouth. Gleaming my eyes drift across the counter onto the open glass display below were I take in several choices of cupcakes (4,000 won) and a toasted sandwich called Kaya toast (2,500 won). I think to myself a cupcake would be a tasty compliment to this fine cup of coffee. “What flavor of cupcakes do you have?” I inquire. “Today, we have tirimasu, chocolate and green tea. The green tea is made with Japanese Matcha and the other two are Dutch coffee based. I make them fresh every morning,” she responds with her endless smile. “May I have a green tea cupcake,” I order turning around and withdrawing the small chair from the table behind me. Sitting down I pull out my laptop and begin to write.

As she busies herself extracting the cupcake from the display case, I begin thinking back over the last hour and a half wondering how fate and a flip of a coin had brought me into this Dutch coffee shop. ‘Sometimes ‘fate’ just has a plan for us and we just need to follow,’ I type… as the words sink in I hear the voice of an old friend, Harold come fluttering back into my mind, “this is a blessing in disguise, you wait and see.” 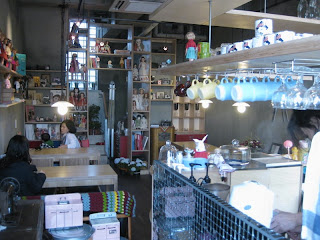 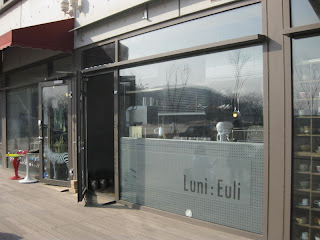 Author Bio:
It's simple; Aaron travels therefore he is happy. He has lived in Australia, Canada, Japan, South Korea, Thailand and the United States. He's traveled extensively throughout central america, the oceanic region and back again. Full of vim and vigor he's a globetrotting freelance photographer and writer. To catch up with Aaron email him at;ajacksoncrabb@yahoo.ca. You can also follow him at http://www.examiner.com/asia-travel-in-national/aaron-j-jacksoncrabb

If you are interested in contributing to Seouleats.com, please contact Daniel Gray at seouleats at gmail dot com
cafe hyeri village reviews