I will be a guest speaker for the One Circle Community 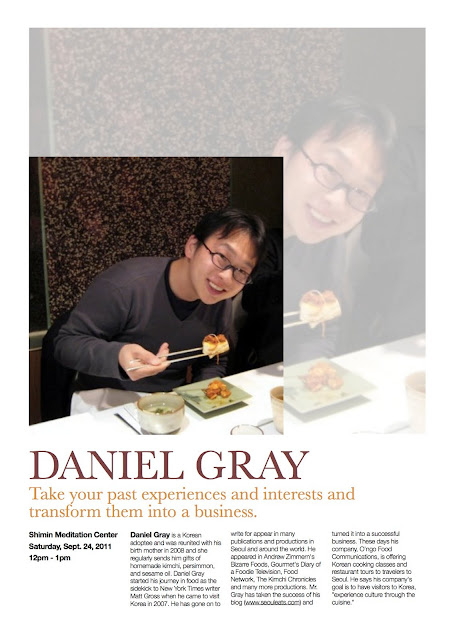 Here is their write up and I think you can sign up for the event here on Facebook.

Here is their write-up.

A Korean adoptee, Daniel Gray was reunited with his birth mother in 2008 and she regularly sends him gifts of homemade kimchi, persimmon, and sesame oil. Daniel Gray started his journey in food as the sidekick to New York Times writer Matt Gross when he came to visit Korea in 2007. He has gone on to write for appear in many publications and productions in Seoul and around the world. He appeared in Andrew Zimmern's Bizarre Foods, Gourmet's Diary of a Foodie Television, Food Network, The Kimchi Chronicles and many more productions. Mr. Gray has taken the success of his blog (www.seouleats.com) and turned it into a successful business. These days his company, O'ngo Food Communications, is offering Korean cooking classes and restaurant tours to travelers to Seoul. He says his company's goal is to have visitors to Korea, "experience culture through the cuisine."

Pictures are taken either with my Panasonic DMC-G2 Camera with 20mm Lens or with my iPhone 4G
Join the Seoul Eats Facebook Group Page to keep to date with the latest events.
press