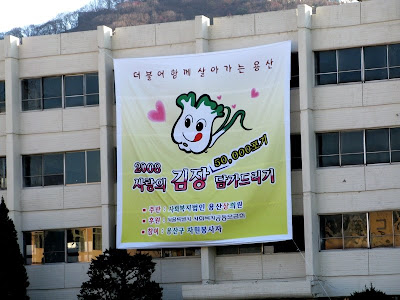 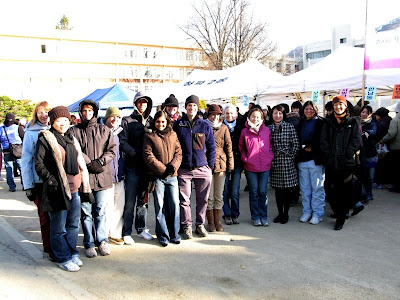 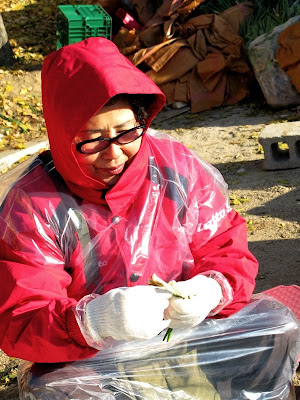 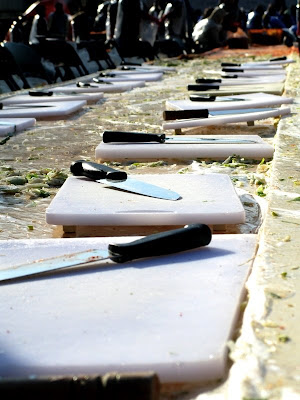 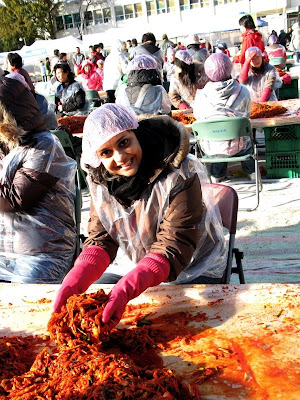 Today is the start of Kimjang which is the kimchi making festival for charity. As you probably know, kimchi is the ubiquitous food in Korea. It is served with every Korean meal and there are those that won't consider a meal complete if it doesn't have kimchi and rice.

Paul Hussey and the Seoul Global center organized a group of people to go to the festival to participate in making kimchi. This year the organizers decided to make 50,000 heads of kimchi. 50,000 heads of KIMCHI! To do this required a tremendous amount of organization and fortitude.

First of all, it was cold. As soon as I got into the cab, the taxi driver told me it is was minus 7 degrees celcius today. The day before it was minus 5. The cold, unforgiving Korean winter came on Sunday -only 3 days ago- and it looks like it's going to stay.

When we got to the festival we were asked to put on plastic smocks, cloth gloves, pink rubber gloves, and a hair net. Then we sat down before piles of red vegetables. It was freshly made kimchi sauce which consisted of red pepper powder mixed with garlic, ginger, shrimp paste, slivers of turnip, and green onion.

We sat and tried to stay warm over cups of hot tea or the hand warmers that we were given until the salted heads of cabbage came. A Korean woman yelled something in Korean and we all looked at her. She demonstrated that we were supposed to take a head of cabbage and open it up. Then we should take the red pepper mix and spread a little bit on each leaf. She took a big, handful and put it on the leaf. It was obviously too much. The woman said something else and then made an "X" sign with her hands and said no. She then took grabbed a much smaller amount with her finger and thumb, placed, on the leaf. She then folded that leaf over and then did the same for the next. She then said, "OK" and gave us a thumbs up.

So it was then our turn to do it. It was pretty easy, yet involving. The wilted leaves of the cabbage were easy to lift and to spread the mixture. It was a bit time intensive because it, apparently, was very important that each leaf was covered. I apparently wasn't my job well enough, because the woman came over and grabbed my head of kimchi. She shook out most of my filling and then demonstrated how to do it correctly. Apparently, I was adding way too much red pepper filling.

So on a cold Wednesday morning, I made kimchi with many other members of the global center. It was fun to meet people from all over the world as we all worked together for a common cause. There were people from Spain, Dubai, Japan, China, America, and Canada among us.

We each made about 10 heads of kimchi. Volunteers would then pack these in plastic lined boxes and they would be packaged up and sent away. I hope the kimchi I made was delicious.