The Best Japanese Ramen in Seoul 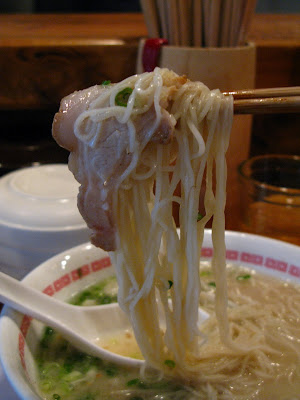 Here is one of the articles I wrote about the best ramen in Seoul. And yes, I know that Tum Sae Ramen is Korean style ramen. I included it because the Japanese tourists I talked to raved about it.

The Best Japanese Ramen in Seoul

When I think of Ramen I think of my favorite foodie movie: Tampopo by Juzo Itami. It is a food movie told in vignettes about a group of adventurers seeking to make the perfect bowl of Ramen. It epitomizes the Japanese’s obsession with food in a way that explains the profusion of Ramen shops in Japan. In Japan you will find Ramen shops on every corner and there are many excellent home chefs that make their own.

Ramen has several components: the broth, the noodles, the meat, and vegetables. The perfect bowl is a subtle balance of each. The broth gives zip to the noodles, the crunch of vegetables counterbalances the soft noodles, and the savory pork (or other meat) transforms this snack into a meal.

Recently, Japanese Style Ramen has started to become popular in Seoul-especially in the Hongdae area. I decided to seek out and find the unique, the strange, and great bowls of Ramen in the city. So let the countdown begin.

6. Raw in Gangnam. This restaurant is located behind Kyobo Tower. They serve Japanese style cuisine and Ramen. And it was recommended by some university students that I met on the subway. At Raw I got a massive bowl of noodles in a miso broth topped with seaweed, cabbage, carrots, pork, mussels, and corn. Corn! I am not a fan of corn in my ramen. So…I guess this Ramen is alright if you’re very hungry. 3482-4554.

5. Tum Sae Ramen in Myeongdong. I asked some Japanese tourists what their favorite ramen place was and they directed me to Tum Sae Ramen, which is right near the Cinus Movie Theatre. The walls are covered in notes- it looks as if a confetti bomb had exploded in the place. In this small shop you’ll find tables of people sweating over bowls of blood red noodles followed by gasps and long gulps of water. Their ramen is very spicy and not the Tampopo ramen I was looking for. Locations throughout Korea. Website: http://www.teumsae.com

4. Ichi-men in Sinsadong. This kitsch place has gained a certain notoriety among the college set. The novelty of this place is that you order your ramen at a computer console and then go sit at an enclosed, private booth. You check off on a sheet how you would like the ramen cooked, the kind of rice, and side such as kimchi or pickled radish. You can even add calcium to your ramen. Calcium! Then you wait until the ramen is served through a hole in the front of the booth. It is a fun experience and potentially you can eat without seeing another human being. But the ramen was…well… average. The standard style soup was a bit too spicy for me. (In retrospect I would have gotten the mild broth.) Also, the soup had a seafood and an overly wokked pork broth. Go out Sinchon (신촌) exit 1 and make a left out Hyundai Department Store. 02-333-9565.

3. KoKo-Ro Ramen in Sinsadong. This joint is right across from Ichi-men and it showed promise. As soon as I entered, I was welcomed with a robust “Irashaimase!” They even had a ramen ordering ATM like Ichi-men. I got the standard ramen with roasted pork and the chef went to work. The place looked like a ramen place straight out of a Japanese anime. The bowl of ramen showed promise. The broth was rich and full of pork flavor and the meat was charred so it was crispy yet succulent. Also there were candied garlic slices that added a savory component to the dish and the noodles were cooked right- but they weren’t the typical kansui (yellowish-wheat type) noodles. The individual components were good, but they just didn’t come together as a whole. Give them some time. I’m sure they’ll get it together. Email: foodguide@yahoo.co.kr 02.335.3422. Go out Sinchon (신촌) exit 1 and make a left out Hyundai Department Store.

2. 81 Banya Ramen in Itaewon. My ramen journey brought me back to my home turf. 81 ramen has been in Itaewon for 6 years. It was started by a Japanese noodle chef that wanted to bring his dish to Seoul. Did he bring it? I believe he has. This is the only place you can get the traditional bowl of Japanese noodles that I had been seeking. The broth is clear and it has rich globules of pork fat. The noodles are light and smooth and the pork just disintegrates in your mouth-it is that tender. I mean it even has the bamboo shoots and half an egg. They give several regional options such as ramen from shoyu, tonkotsu, and miso. If you are a real man you can get the kitchen sink bowl of ramen and if you finish the whole bowl in 20 minutes, it’s free. Across from the Cheil Building in Itaewon or go out Itaewon station exit 2 and walk for 15 minutes. 02-792-2233.

1. Hakatabunkko (하카타코) in Hongdae. Down from the Far East Broadcasting company near Sangsu Station, you’ll find a line of people before an austere looking storefront with a white curtain with Japanese writing. About a month ago, I decided to wait in the line in the rain and see what all the hype was about. The hype is all about the ramen. Sure, it is not the Japanese style ramen I was looking for, but a perfect bowl that Korea has called it’s own. The broth is super rich- so rich that it is cloudy like a sandstorm in the Sahara. I learned that this style of broth is called kontotsu and it is made by carefully simmering the pork bones for hours and hours. The noodles are fine silk threads that zip like electricity. It also has crunchy bean sprouts, fatty roasted pork, and chives. As you receive your bowl of noodles, they give you a garlic press so you can mince a whole clove into this dish. The garlic and a little crushed sesame seed complete this dish. All the components work harmoniously. I finished and then lifted the bowl to get every last drop of soup. I thought of getting a second, but I saw the hungry crowd behind me, so out of courtesy; I got up. 02-338-5536. Directions go out Sangsu Station exit 2 and turn at the Far East Broadcast company sign and wait in the line.
groove magazine noodles ramen seoul Seoul Eats