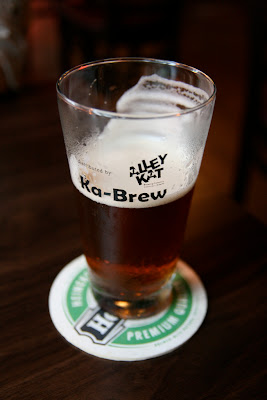 Here is the article that is in this month's Groove Magazine written by Paul Ajosshi. Read his blog at http://ajosshi.blogspot.com/

In the sweltering heat of Seoul’s summer, I had the good fortune of being invited to Beer O’ Clock in Shinchon for a cooling ale and a chance to sample their delicious food. On arrival my friend and I quenched our thirsts with draft Alley Kat beer (5,500 won per glass); this Canadian brew comes with a creamy head and has a honeyed bitterness that is a refreshing change from the usual Korean lagers.

Beer O’ Clock is run by Trevor MacDonald, Kim Mi Young and Clark Webster. That night Clark was on hand to recommend the bar’s best dishes. After perusing the menu, we decided on “The Webby” (named after Clark), a burger with “cheeze, jalapenos, onions, mushrooms, lettuce and a dill pickle” for 9,000 won and the “Bacon Cheddar” pizza for 13,000 won. We also ordered five “Hot” wings and five “Greek” wings (only 800 won per wing or 400 won each if you visit on Tuesdays). 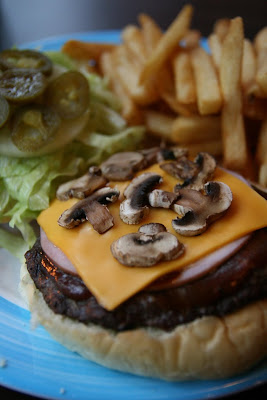 “The Webby” burger was beautifully presented and served with an ample amount of french fries. The large patty was perfectly seasoned and the jalapenos lent a slow burn to this hearty hamburger. Extra condiments are provided for those who like to sauce their patties up and if you’re not in a burger mood, try a grilled chicken sandwich or “T-bone’s Donair”. 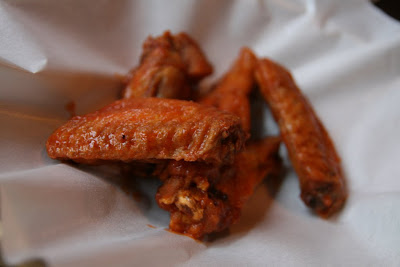 The “Hot” wings tasted as if they came straight out of Buffalo, New York: pungent, but not too spicy. The “Greek” wings were even better, seasoned with lemon and pepper, they were incredibly "moreish," which in British terms mean you want more of them and they were devoured in a matter of minutes. 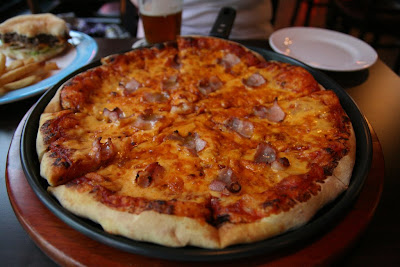 An impressive pizza: the crispy base and cheesy bubbling top looked far more appetizing than anything you can pick up at Dominos and the rich tomato sauce reminded me of pizzas from my childhood. The bacon does not disappoint and this glorious, messy dish is perfect for sharing with friends as you watch a game of hockey or American football on the bar’s big flat-screens.

Beer O’ Clock runs regular specials throughout the week including “Beat the Clock” on Saturdays from 3.00 pm, where draft Hite Max starts at 1,000 won per glass and increases by 500 won every half-hour until 6.00 pm; Wednesdays are “Wines-days” (4,000 won a glass) and Thursdays are Ladies Nights. They have regular live music events and cater for sports fans by showing all the big matches.

This latest incarnation of Beer O’Clock may have only just opened in May, but they have quickly become the friendly foreign face of Shinchon and provide a great bar where you and your friends can relax, sink a beer or two and enjoy delicious Canadian home cooked food. 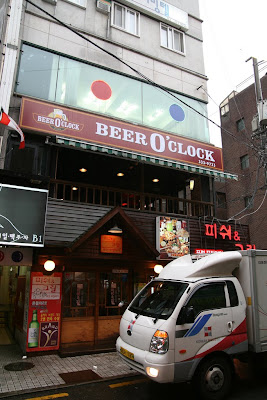 Head to exit 1 of Shinchon station and turn right at Natuur, head down the street, over the intersection, past 7-11, count three alleyways and turn left opposite the Blue Lion Casual Pub Sign into an alleyway with a distinctive traditional house on the corner. Beer O’ Clock is on the left above “Fish and Grill”. Visit www.beeroclock.ca for details.
beer o'clock canadian food hongdae itaewon reviews restaurants reviews