Gorgonzola Pizza in Hongdae at Storia by Lauren McPhate

On a chilly autumn night I went in search of pizza in Hongdae. After a few disappointing experiences in Hongdae the past, I was hesitant. After some wandering I stumbled upon an Italian place next to GR8 hookah bar and Ting Tings. Storia. I peeped in. It looked decent, so onward I went. It’s a very modern space with hardwood floors, funky blue water glasses and cool hanging light fixtures. The front windows peeled away to let in a breeze, and there were blankets on each chair for those who didn’t appreciate the crisp fall air. The place was pretty crowded for a Sunday at 6 and I noticed a lot of young couples. I figured this probably translated to good, cheap food. 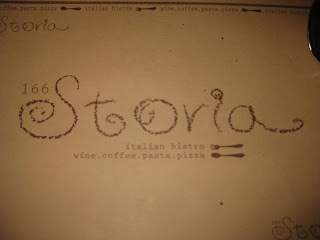 The first thing on the menu to catch my eye was the set meals. Set A was comprised of bread, drink (juices and coffees, which by the way are all free until 3pm), a choice of soup, salad, a choice of pasta, and a dessert. All of these for a mere 17,000 won. The second set was similar but offered a steak entree and was slightly more expensive. Had I been hungrier, and not on a quest for pizza, that would have been a no-brainer. I looked further. There was a wide selection of pastas, risottos, sandwiches and salads. There was also an extensive wine list. But it’s pizza I was after, and it’s pizza I was going to get.

There were 5 or so different pizzas; the classic margarita, salami, gorgonzola, steak, and a couple others I am having trouble recalling at the moment. They all ranged from 10,000- 17,000 won each. I went with the gorgonzola. After a couple minutes the waitress (of which there was only one to handle the whole place, poor thing!) brought out a plate of rosemary bread with balsamic and olive oil. The bread was heavenly! Loaded with rosemary flavor, soft and fluffy in the middle and crunchy on the outside. I would go back just for the bread. A few short minutes later and a circle of blue and white bubbly goodness appeared before me. The crust of the pizza was ultra-thin, and as aforementioned, blue! There was no sauce, just crust and cheese. It was also served with a side of honey. It was delicious! Certainly not your traditional pizza, but the crispy crust with the gorgonzola honey combo was taaaasty! I can’t wait to go back to check out the set menu. 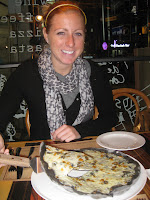 Lauren McPhate is a foodie in Seoul that is originally from New Jersey. You can follow her adventures at http://pojangmacha.blogspot.com/

If you would like to be a contributor to Seoul Eats, please contact Daniel Gray at seouleats at gmail dot com
hongdae Lauren McPhate pizza Seoul Eats